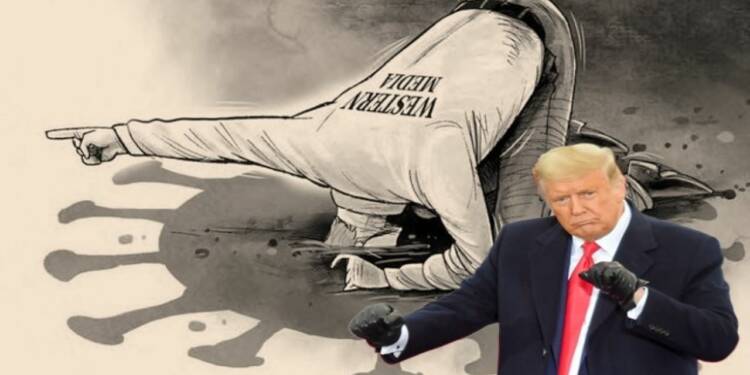 Bias in the American media is nothing new. It soared to new heights once the barrier of patience was cracked by Donald Trump’s election to the presidency in 2016. Interestingly, the year also marked the end of the much venerated objective political coverage in the United States. It further paved way for the media to drift towards a zone where brazenness and contempt prevailed under the garb of journalism.

Anything that goes in favour of Trump would perturb the American liberal establishment to the core. It happened yet again with Trump’s recent fundraiser at Mar-a-Lago in Palm Beach, Florida for Black candidate John Gibbs. The event had in attendance famed black singers including Ray J, Coffey Anderson, and Tommy Vext. The fundraiser holds relevance since it was Trump at his rhetoric best, trying to rope in the black votes that added intrigue since it is something that the republican establishment seldom does.

Worryingly, Trump’s successive pursuit of getting crucial support from the blacks has translated into a nightmare for liberal media folks in the states. Reckoning the adulation that the news may shower upon the former president, the media quite wilfully shunned the news from getting covered.  This happens to be the same liberal media that went helter-skelter at covering anything or everything that put Trump in the crosshairs.

The US media’s demagoguery to Black voters by portraying Trump as their eternal nemesis has had a long run. Any predicament of the blacks during the Trump era gave the liberal media an olio of options to run a punitive narrative pinning every blame upon Trump.  Many people believed them, but now it seems like the case has been lost.

Read more: So grave is the crisis that even liberal media wants Biden to stop talking now

The fake diversity that Liberals promote

The virulent media and its legions that are boisterous about the diversity it promotes should chance upon now to reveal out in public about the blacks they employ in their workspace. They should make understand the world that the kindness and empathy they float on air during their televised coverages are not mere soapsuds. In all probability, the liberal media won’t brave it since it would leave their loyal viewers in fury after getting to know about the paltry few they employ.

Let’s just imagine the fundraiser event with Biden in the scene. The media might have brought back their long-shrouded vast coverage by citing off unending opportunities that the Blacks have with Biden at the helm of affairs in the USA. The narrative drifts apart to racial bias when it happens to be Trump.

At crossfire for his policy decisions, no amount of push from the liberal media would deliver the desired result for Joe Biden. Sensing the game unravelling, Trump has now bolstered his campaign run persuading the Black voter base to jump fences in large numbers towards the Republic camp. The fact remains that Trump’s words and actions are chock full of power with important issues such as school choice, illegal immigration, and urban revitalization getting addressed that generates a better appeal among the Black voter base. Even if a battered liberal media gets back the arsenal to hurl back tirades against Trump, the accusation of bias will stand strong and the black citizens won’t buy the narrative again.