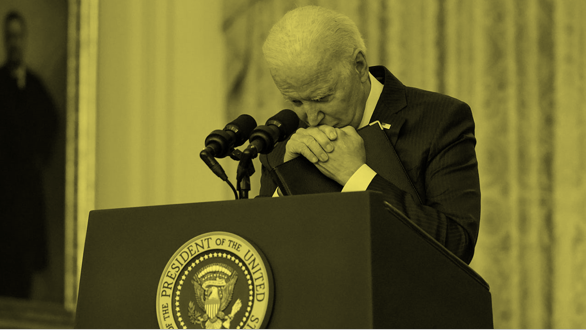 Imagine you being Joe Biden’s aide, what advice will you give to him? Well, I would have asked him to shut up. And this is exactly what the Western liberal media is also doing.

Following Biden’s disastrous faux pas about the American response to any use of chemical weapons by Russia, WSJ came up with a bit of advice- “The President Should Avoid Public Speaking.” You would be surprised to hear this from American liberal media that had put all its weight behind the 79-year old during the 2020 Presidential elections. But then, Biden’s public utterances are actually all too embarrassing for the US.

US President Joe Biden visited Europe recently. And the next thing we know, Biden was taking questions from reporters at NATO headquarters in Brussels.

The stage was set for a typical Biden blunder and to be fair, the US President didn’t disappoint. He was asked if the US or NATO would resort to military action if Russia uses chemical weapons. Biden responded, “We would respond if he uses it. The nature of the response would depend on the nature of the use.”

The answer didn’t sound very meaningful. So, Biden was asked the same question in expectation of a proper reply. This time the US President said, “it would trigger a response in kind.” So, the US and NATO would use banned chemical weapons? Will they violate international law with impunity and violently discard the values that the West claims to own and espouse?

Like always National Security Adviser Jake Sullivan assumed the charge of damage control. Sullivan said, “No. No. And you heard him in another answer say we’ll respond accordingly — meaning, you know, we will select the form and nature of our response based on the nature of the action Russia takes, and we’ll do so in coordination with our Allies.”

Not the first time

And then, this isn’t the first time that Biden has made a huge blunder. In January, the US President said that a “minor incursion” by Russia into Ukraine would be tolerable to the US and its allies. In hindsight, even if the US and NATO were planning on ditching Ukraine at the last moment, it wasn’t a good idea to disclose the embarrassing secret.

Anyhow, Zelensky had then slammed Biden for belittling the issue. A little over a month later, the “minor incursion” did take place. Today, Ukraine’s very existence and America’s global reputation are under a huge threat.

Trust me with this, things can get a lot worse with Joe Biden. He has done things like calling Vice President Kamala Harris the “First Lady“. His remarks elicited laughter from the audience. It would have been alright had Biden been a stand-up comedian. But he is the President of the United States. And his gaffes do drag the US into a mere laughing stock before the world.

Read more: Kamala Harris has been brutally checkmated by Biden

And then, Biden has the unique distinction of being the only world leader who confused Ukraine with Iran, when he said, “Putin may circle Kyiv with tanks, but he’ll never gain the hearts and souls of the Iranian people.”

Every time Biden speaks or fails to gather his thoughts, he ends up embarrassing himself and the United States.

Biden’s public remarks are eroding his credibility, as well as that of the United States. He should do himself and his country a favor by listening to the liberal media’s advice of not speaking, let alone in the middle of an international crisis.