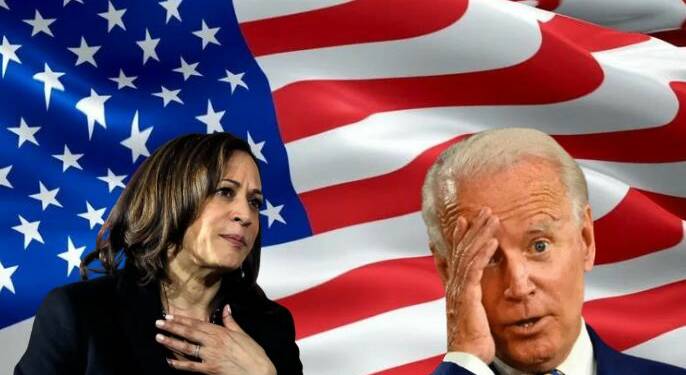 If you chose Donald Trump and Mike Pence, congratulations! You are in sync with pretty much the whole of the United States. Because let me tell you something, if there are two people which Americans hate from the deepest pit of their guts right now, it is the duo of Joe Biden and Kamala Harris. Joe Biden’s approval ratings have taken yet another plunge, and this time, he has gone even below the most hated Vice President in U.S. history, Kamala Harris.

A newly released Gallup Poll showed on Tuesday that only 44 per cent of Americans approve of Harris’ job as U.S. Vice President, which is a fall of 5 percentage points since the agency last recorded her job approval ratings. Meanwhile, only 43 per cent of citizens approve of Biden’s job as President.

Together, Joe Biden and Kamala Harris are leading the most disliked administration in U.S. history. 2021 has been pretty bad for the United States, owing to the ineptitude of its top two leaders.

Joe Biden has had a very rough year. It’s strange, you know. It’s unnatural for any President to have such low approval ratings in the first year of his presidency. To add to it, to have the most disliked Vice President around is just all the more worrisome. But Joe Biden has earned these ratings. He has screwed things up so magnificently that his ratings still being in the 40-percentile range is a miracle in itself.

Joe Biden has failed to control Covid-19 in the United States. But was he not the one who promised Americans that he will control the pandemic? He was the one who blamed Trump for not being able to save American lives. Yet, under the Biden administration, more Americans lost their lives. On Thursday itself, the United States reported just close to 600,000 new infections.

Joe Biden has surrendered. He has gone on a New Year holiday after telling Americans that states need to do more to prevent Covid-19 transmission. He gave up and ran away when the country needed him the most.

That tells you how gigantically Joe Biden failed on his most fundamental promise of saving American lives. And then, Biden refuses to question China for its handling of the pandemic, which has brought the world to this stage. He refuses to hold China accountable. And Americans hate Biden’s softness towards China.

But there was something that humiliated the United States like never before in 2021. The devastation Covid-19 has caused is a domestic issue. But what happened in Afghanistan went on to become an event that shamed America globally like never before. Joe Biden botched up the Afghanistan withdrawal,did not prepare for it enough and ignored crucial intel which indicated that the fall of Afghanistan to the Taliban was imminent.

Americans were left behind. The forces struggled to bring people back home, and the visuals went on to embarrass the United States before the whole world. Biden is responsible for such humiliation, and the same reflects in his approval ratings.

Biden is a man of many gaffes. From calling Kamala Harris to supporting the “Let’s Go Brandon” slogan, Biden has done it all. He reads cues provided on teleprompters, admits that some higher powers in the administration will put him in trouble, and of course, falls off aircraft stairs. While these are all funny events, they bring shame to America. The president of the United States should not be a joke, but that’s precisely what Biden is.

To top it all, Democrats are tired of Biden. They are blocking his priority bills in Congress, which is proving to be a major impediment for the Biden administration trying to implement its agenda. Whether it be the infrastructure bill, voting rights bills or even the build back better bill – Joe Biden has faced herculean challenges in trying to get these bills passed through Congress and on his desk.

At one point this year, Kamala Harris’ ratings dropped to an all-time low of 28 per cent! And it isn’t like Americans don’t have enough reason to hate her.

Kamala Harris has created a toxic environment within the White House. Her former staffers describe her as an abusive woman who does not take responsibility for her actions.

Kamala Harris was made the border czar by Biden, but all she has done is to talk about “root causes” of migration from Central America, which hardly resolves the crisis. To make things worse, Biden has given her another thorny task – brazen liberalisation of the American voting system.

She visited Central American countries, but was grandly snubbed while on it – bringing a whole new phase of shame for America, right in its backyard! As the US Vice President, she had a chance to impress the world with her diplomatic skills. But wait, Kamala Harris –a former prosecutor, has no real experience in politics and diplomacy.

Such is her inexperience that she was given crash courses in diplomacy and foreign affairs by Biden until she started undercutting her boss himself.

All of these factors make the Biden-Harris duo the most hated entity in the United States. As numbers stand, Americans just want to get rid of the President and his deputy. Now, the midterm elections of 2022 could prove to be a nightmare for Democrats.