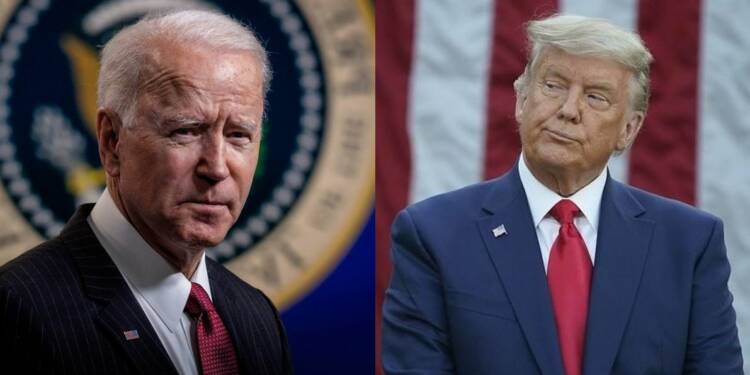 The national Emerson College poll : Polls after polls are suggesting what many have already started to believe, and that is, Joe Biden is not a capable President. Given the backdrop of his administration desperately evacuating from Afghanistan after surrendering to the Taliban, the people of America are realising the disaster of a President who has made his way into the White House and is now making life miserable not just for people in the United States, but for people all over the world.

Joe Biden’s approval ratings have plummeted to their lowest point in his presidency, despite the fact that he has only been in office for six months. Despite his and the Democrats’ brazen rhetoric that “America is back” and “healing,” the American people have begun to see right through the deception. According to a new The national Emerson College poll, former President Donald Trump is the favourite to win the United States election in 2024, narrowly edging Democratic incumbent Joe Biden. The national Emerson College poll said, if the two men were to face off in 2024, Trump would win by a slim margin, with 47 per cent to Biden’s 46 per cent.

According to the study, Biden’s job approval is 50-50 among registered voters. Around 47 per cent, disapprove and 46 per cent approve of his work as president, according to The national Emerson College poll. The remaining 7% were undecided. Sixty per cent of Democrats polled said they would support Biden as the Democratic presidential contender in 2024, while 39% said they would prefer someone else.

The President began the month with an average job approval rating of 51.5 per cent, down from 54 per cent at the start of May. Even recently, according to USA Today, after the botched-up withdrawal from Afghanistan, that has spiralled down further. His overall job approval rating now stands at 41% who approve, plummeting from the usual 50% plus. Meanwhile, 55% disapprove which is a big drop in the closely watched barometer of political health.

Read more: If elections are held today in the United States, Trump will beat Biden by a yuuuge margin

According to Trump, Biden has embarrassed the United States more than any other president in history, surpassing fellow Democrat Jimmy Carter’s 1979 Iran Hostage Crisis. He said that it was a terrible time for the country and that it is not just a military defeat or a psychological defeat, there has never been anything like what’s happened here.

Joe Biden is not even being able to evacuate American citizens from Afghanistan, leave alone the thousands of Afghan citizens who helped the United States and its allies during the 20-year long inconsequential war in Afghanistan. Make no mistake, every American wanted the country to withdraw from Afghanistan, but the sheer incompetence of the Biden administration to deal with the withdrawal has shocked the people of the country.

In a hypothetical GOP primary with seven other candidates, including Florida Governor Ron DeSantis (the only candidate to reach double-digit support at 10% when the former president is in the race), former Vice President Mike Pence, Texas Senator Ted Cruz, and former South Carolina Governor and ex-UN Ambassador Nikki Haley, 67 per cent of Republican voters said they would vote for Trump.

Since the US finished the final steps of its departure from Afghanistan, Biden’s support rating has plummeted. According to The national Emerson College poll, the majority of Americans (68%) feel the US lost the war in Afghanistan, while only 32% believe the US won. When asked which president deserves the majority of the blame for the war in Afghanistan, 49 per cent said former Republican President George W. Bush, who launched troops there in 2001. With 24 per cent, Biden came in second, followed by Barack Obama (18 per cent), and Trump (10 per cent).

Because of Joe Biden’s declining approval ratings and polls, Donald Trump would easily win if elections were held today. With three and a half years left in Biden’s presidency, Trump’s position will only increase until 2024, resulting in the removal of Joe Biden and Kamala Harris from the White House. Most crucially, the Republicans appear to be on track to win both the Senate and the House of Representatives in the upcoming midterm elections.