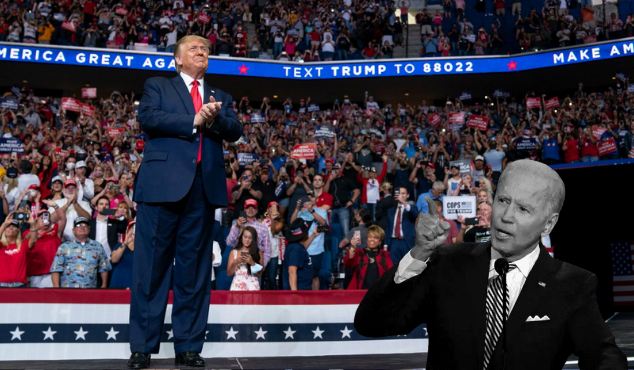 It is happening. The people of America are realising the disaster of a President that has made his way into the White House, and who is now making life miserable not just for people in the United States, but across the world, given the backdrop in which his administration is desperately evacuating from Afghanistan after surrendering to the Taliban. Joe Biden’s approval ratings have gone down to their lowest in his presidency so far, and it has just been six months for the man in office. Notwithstanding his and the Democrats’ brazen propaganda to show that “America is back” and it is “healing,” the people of America have begun seeing right through the charade. In fact, if voting took place in the US today, Donald Trump would win with a huge undisputed margin against the Biden-Harris duo.

The President began the month with an average job approval rating of 51.5 per cent, down from 54 per cent at the start of May. Now, according to USA Today, after the botched-up withdrawal from Afghanistan, that has spiralled down further. His overall job approval rating now stands at 41% who approve, plummeting from the usual 50% plus. Meanwhile, 55% disapprove which is a big drop in the closely watched barometer of political health.

Interestingly, the steep fall in Biden’s approval across the United States is driven largely by his administration’s catastrophic handling of the Afghanistan withdrawal, which has really snowballed now into a desperate evacuation campaign. However, what is also massively hurting Joe Biden’s approval ratings are the number of Covid-19 infections across the country, and the massive number of Americans who are now struggling at intensive care unit (ICU) wards.

With the midterm polls a year away, the Democrats and the Biden administration have been given a reality check, and the numbers which have now come out suggest that it would not be extremely difficult for the Republicans to win handsomely. What would also be worrying the Democrats is the fact that among their own constituents, support is largely dipping. This, complemented with the fact that the Republican voters would be consolidating their backing for the grand old party could spell doom for Joe Biden and Kamala Harris real soon.

Meanwhile, just 25 per cent of voters said they approved of Biden’s handling of the situation in Afghanistan. Americans are realising that Joe Biden has spelt a disaster for the United States in the first six months of his presidency. Donald Trump, meanwhile, is making full use of the catastrophe that Joe Biden has unleashed on the United States, and is attacking the Biden administration for its callous handling of the Afghanistan withdrawal. According to Trump, Biden has embarrassed the United States more than any other president in history, surpassing fellow Democrat Jimmy Carter’s 1979 Iran Hostage Crisis. He said that it was a terrible time for the country and that it is not just a military defeat or a psychological defeat, there has never been anything like what’s happened here.

Joe Biden is not even being able to evacuate American citizens from Afghanistan, leave alone the thousands of Afghan citizens who helped the United States and its allies during the 20-year long inconsequential war in Afghanistan. Make no mistake, every American wanted the country to withdraw from Afghanistan, but the sheer incompetence of the Biden administration to deal with the withdrawal has shocked the people of the country.

Meanwhile, America’s allies are infuriated. France, Germany, Britain, India, Japan and others are all shocked to see the manner in which they were kept out of the loop by Biden, and how, they have all been left in the lurch. Meanwhile, as explained by TFI, Joe Biden is most probably paying ransom to the Taliban to ensure that the evacuation campaign is not hijacked by the violent extremist organisation.

The fall in approval ratings of Joe Biden means that if Donald Trump were to contest elections today, he would win hands down. With three and a half years of Biden’s presidency still left, Trump’s position until 2024 is only expected to be strengthened further, leading to the ouster of Joe Biden and Kamala Harris from the White House. Most importantly, the Republicans look poised to win the upcoming midterm polls, leading to their majority in both the Senate as well as the House of Representatives.