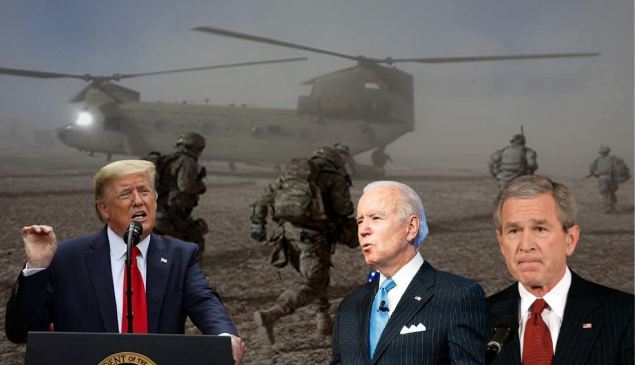 It is very rare yet heartening to see a former US President not sugarcoat situations and blame the exact people who are responsible for the problems under discussion. Former President Donald Trump has branded Biden’s handling of the Afghanistan pull-out as “the worst humiliation in the history of our country” in an interview with Sean Hannity on his Fox News show Tuesday night. While he slammed Joe Biden he also ripped into the US war lobby, even going to the extremes of criticising Bush for making the US go into the Middle East.

In an interview with Fox News’ Sean Hannity on Tuesday, Trump slammed President Joe Biden for the disaster unfolding in Afghanistan, since the weekend. According to Trump, Biden has embarrassed the United States more than any other president in history, surpassing fellow Democrat Jimmy Carter’s 1979 Iran Hostage Crisis. He said that it was a terrible time for the country and that it is not just a military defeat or a psychological defeat, there has never been anything like what’s happened here.

While mentioning the extent of damage the US has received diplomatically, he did not forget to mention that if he was in power, the country would not have to deal with the humiliation. Trump said that he warned Taliban leader Mullah Abdul Ghani Baradar that if an American was killed or the insurgents encroached on unapproved territory, the US would retaliate tenfold. These statements can be very well understood as Trump responding to the attempt by the Biden administration and the Democrats to scapegoat the previous Trump administration.

Kabul has fallen into the Taliban’s hands and the people have been left with no choice other than to run for their lives. For Afghan people, the US-led withdrawal of the NATO forces has come as nothing short of a disaster. It is the sitting president of the United States, Joe Biden, who oversaw this hasty and politically motivated drawdown that spurred on a humanitarian disaster in Afghanistan. Ideally, the president and his top council should immediately hand in their resignations and apologize to Afghans for all the chaos unfolding in Afghanistan. Instead, the president is startlingly blaming former US President Donald Trump and the poor Afghan people for his own mess.

Read more: Scapegoating begins: ‘Foreign policy expert’ Biden is pinning the blame on Afghans and Trump for his own mess in Afghanistan

If the agreement was breached under Trump, his administration, according to Mr Hannity, would have dealt with the Taliban in the same way it dealt with the ISIS caliphate in Syria. While discussing the same, Donald Trump also did not forget to slam the US war lobby and the increasing commitment of consecutive governments towards the Middle East and Afghanistan, which started under the Bush administration.

In the televised interview, Trump said, “Think of it, we took this horrible place, it was the worst decision to go into the Middle East, I know the Bush family will not be happy but I believe it was the worst decision in the history of our country when we decided to go into the Middle East.” Trump did not mince his words and hover around facts avoiding reality. By pointing out the huge sums of man and money the USA has expended in the region, he ripped apart the US war lobby, showing their unconcerned attitude towards the people of the USA.

Trump said that the situation in the region has turned out to be quicksand. He said that the US has destroyed the Middle East, and asked the interviewer to think if the region is better now than it was 20-21 years ago which he then answered by stating that it’s much worse. Trump then reiterated that going into the region was a horrible decision and cost the US trillions of dollars.