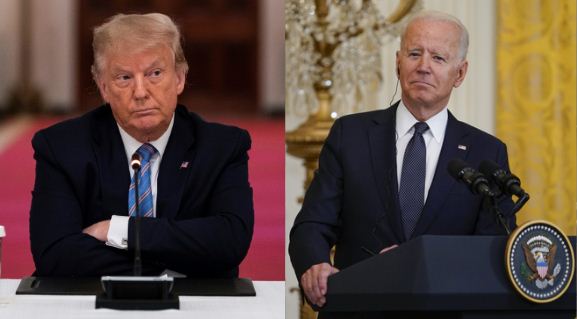 Kabul has fallen into the Taliban’s hands and the people have been left with no choice other than running for their lives. For Afghan people, the US-led withdrawal of the NATO forces has come as nothing short of a disaster. It is the sitting president of the United States, Joe Biden, who oversaw this hasty and a politically motivated drawdown that spurred on a humanitarian disaster in Afghanistan. Ideally, the president and his top council should immediately hand in their resignations and apologize to Afghans for all the chaos unfolding in Afghanistan. Instead, the president is startlingly blaming former US president Donald Trump and the poor Afghan people for his own mess.

As reported by CNN, the White House believes that it has a scapegoat in former President Trump because he was the one who presided over the decision to initiate the withdrawal. As per the US officials, Trump’s decisions forced Biden’s hands, leaving the new administration no choice but to pull out, lest US forces get dragged into another major war with the militant group.

Indeed, it is true that it was former US President Donald Trump who had announced the withdrawal back in November last year and oversaw a major drawdown on 15th of January this year, before handing over the Presidency to his successor Joe Biden. However, it was largely under Biden’s administration that the Taliban re-emerged with a soaring success while the US administration scrambled to assess just how quickly the government in Kabul could fall.

Read More: Biden could have done it differently but he chose to trigger chaos in Afghanistan

Joe Biden, his secretaries and his NSA completely failed in assessing the situation on ground. The tacit admission came straight from the horse’s mouth on Monday when the president Biden himself accepted that “the collapse of the Afghan government and the Taliban retaking control happened more quickly than the US government had anticipated.”

So Biden acknowledged the Saigon on steroids.

He could still withdraw and avoid all this catastrophe. There was another waypic.twitter.com/CfLOyRAxhs

This clearly illustrates how US officials were caught unawares when Taliban made startling territorial strides in Afghanistan, took over Kabul and the presidential house, and made Afghans run for their lives. Once a proud nation, Afghanistan now stands at the verge of a civil war and this could very well eventuate into a massive refugee crisis.

What comes as more horrifying is the fact that all the weapons and the arsenal meant for the Afghan army have now fallen into Taliban’s hands. The US could easily have destroyed them or done anything else before the Taliban takeover. When a Pentagon official was asked for the same, he simply refused to respond and moved over to the next question.

REPORTER: "So there's no US actions being taken to prevent equipment from falling into the hands of the Taliban by destroying it or anything else?"

MAJOR GENERAL HANK TAYLOR: "I don't have the answer to that question." pic.twitter.com/m0wGN1fcFR

There could be a different and a successful withdrawal if Trump had still been the president. He could have done things his own way, a much better way than the sitting president. Recently, Trump blasted President Biden for messing up the situation in Afghanistan and an “unacceptable rise of Taliban” out of Biden’s botched up Afghan policy.

A miffed Trump reportedly said that the US troops pullout, which Biden plans to complete by August 31 would have been “a much different and much more successful withdrawal” had he still been the President. He added, “Taliban understood that better than anyone.” In his statement, Trump claimed, “If I were now president, the world would find that our withdrawal from Afghanistan would be a conditions-based withdrawal.”

Read More: The Fall of Afghanistan: The world is missing Trump right now

Well, to put it simply and precisely- Trump is right. Biden’s Afghan policy is to exit Afghanistan without even dealing with the Taliban. The US President did not ensure that the Taliban is made subservient to the United States of America and is made to comply with some strict preconditions for a US troop pullout. Trump, on the other hand, would have imposed conditions on the Taliban and would have put conditions in relations to the exit.

What came as an insult to injury was Biden’s scapegoating of poor Afghan people who have been left disarray at the hands of the US government. President Biden’s National Security Advisor (NSA) Jake Sullivan on Monday pinned the blame on Afghan forces and said “He (the President) thought the Afghan national security forces could step up and fight because we spent 20 years, tens of billions of dollars training them, giving them the best equipment, giving them support of U.S. forces for 20 years. And when push came to shove, they decided not to step up and fight for their country.”

What a bunch of crap

This administration was specifically told Afghan forces would surrender faster than our ability to exit.

They decided to ignore these warnings & smugly tell everyone how smart & brilliant they are https://t.co/ie4nMG1GIX

President Biden also alleged that the Afghan leadership has failed the country and it failed to follow his advice. Addressing media reporters, Biden recalled a telephonic conversation that he and his Afghan counterpart held in July. During the discussion, the US leader said that he had “asked Ghani to prep the country to fight their civil war after the US army departs. Additionally, he’d also asked him to ‘clean up the corruption in government, unite political leaders and engage in diplomacy with insurgents so as to seek a political settlement.” But, Biden said, that Afghans failed to stand up to their promises.

When Biden was chosen for the race to the White House, he was touted as a shrewd diplomat and a foreign policy champion who would bring ‘America back’ and would restore the USA’s glory allegedly lost during Trump’s reign. However, the crisis unfolding in Afghanistan has severely impaired whatever little confidence the American allies had bestowed into the USA’s leadership. The much touted idea of “America is back” has fallen flat; instead, the US has turned its back towards its allies under Joe Biden. Afghans will never forget this unkindest cut of all.