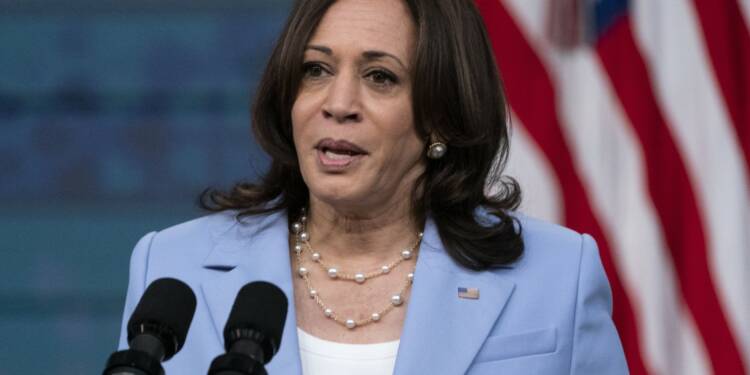 At the time of swearing-in of the new administration, the whole leftist cabal was ecstatic over the fact that Kamala Harris took over as the Vice President of the USA and expected her to lead the decision making alongside an ageing President Joe Biden. However, with the way in which she is disgracing her position, the people of the USA seem to have had enough. According to an aggregate average provided in a survey by RealClearPolitics, Vice President Harris received a combined unfavourable rating of 46% in three recent polls. In the same category, the number is three points below than Biden’s 43 per cent. Harris’ negative rating hit 48 per cent in an Economist-YouGov poll conducted from July 24 to 27.

Harris is perceived less favourably than President Biden six months into his presidency, according to polls. She’s also made some tactical errors outside the White House, according to Democrats, indicating that she hasn’t yet found her footing. While the Democrats can go easy on the VP, this does not change the fact that whatever responsibility she has been handed over, has only proved her to be incapable of getting things done. In such a situation, the one who was being propped up as the Future President might become the reason for the loss of the Democrats in the coming midterms.

A midterm visit by the vice president to a congressional district is typically used to draw crowds and garner publicity for candidates, but Harris’ polling scores are raising doubts about how she might be useful as Democrats fight to save their small majorities in the House and the Senate. Recently, Damning revelations have been made by over 22 staffers of Kamala Harris – both working with her currently as well as formerly associated with her office. The staffers are unanimous in their description of what it is like working for the Vice President. One of the staffers told Politico, “It all starts at the top. People are thrown under the bus from the very top, there are short fuses and it’s an abusive environment. It’s not a healthy environment and people often feel mistreated. It’s not a place where people feel supported but a place where people feel treated like sh*t.”

Read more: ‘It’s an abusive environment,’ Kamala Harris’ disgruntled staffers reveal how it’s like to work under the VP

Kamala Harris was also made the border czar by Biden, but all she has done is to talk about “root causes” of migration from Central America, which hardly resolves the crisis. To make things worse, Biden has given her another thorny task – brazen liberalisation of the American voting system. By failing at every task that she has been handed, she keeps exposing her sheer inexperience and incompetence in both administration and international diplomacy. In fact, she couldn’t even handle questions about the border crisis in a friendly interview. On the subject of not visiting the border, her lame excuse was that she hasn’t “been to Europe” either.

What Kamala Harris does instead is to talk about the “root causes” in a reference to the Central American nations. Her plan is to spend billions of dollars in aid to Latin American governments and expect that people won’t migrate into the US through its southern borders.  So, Harris wants to spend US tax money on corrupt governments with zero accountability of where all that money would go.

In the Economist-YouGov poll, 24 per cent of voters between the ages of 18 and 29 said they have no opinion of the vice president when asked if she is liked. Meanwhile, only 15% of those in the same age range had developed an opinion about Biden.

All these factors have added up to make her the most unpopular Vice President in recent memory. Harris’ inexperience is for everyone to see. As the US Vice President, she had a chance to impress with diplomatic skills. But Kamala Harris, a former prosecutor, has no real experience in politics and diplomacy. She has time and again proven her incompetence. And while her camp wants to pitch her as a woman of colour in the 2024 presidential elections, these factors may stop the Democrats from relying on her even in the midterms approaching next year.