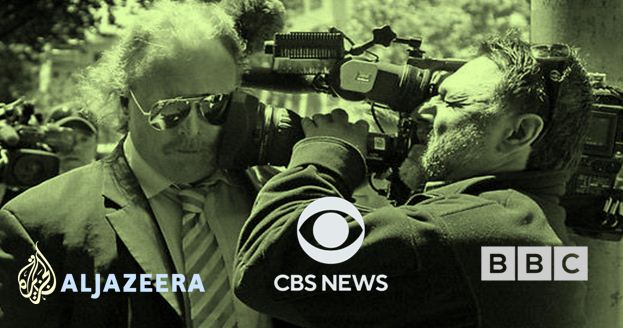 Europeans have been teaching racial equality, secularism and diversity to the Middle East, North Africa and South Asia for several decades now. And who can forget all their propaganda about the open-door policy or migration norms? Yet, all it took for the Western media to turn from an apostle of liberalism to Attila the Hun was a white versus white war in the European Continent.

I am not even exaggerating. Western liberal media is serving a buffet of extremist racism, hard-core nationalism and sheer White supremacism. Here are some of the most beautiful gems coming from the Western media.

‘People with blue eyes and blonde hair’ being killed

In a TV interview with BBC, Ukrainian Deputy Chief Prosecutor David Sakvarelidze had some rather racist remarks to give. He did not speak about people dying in a war. On the contrary, he said, “It’s very emotional for me because I see European people with blue eyes and blonde hair being killed, children being killed every day by Putin’s missiles, helicopters and rockets.”

This is White supremacism at its peak. The sentiment is that we care about deaths, only because White people are dying. War would have been alright had people of other races died.

‘This isn’t Iraq or Afghanistan’

In another gaffe, CBS foreign correspondent Charlie D’Agata said, “This isn’t Iraq or Afghanistan…This is a relatively civilized, relatively European city.” And he managed to say this, while continuously admitting that he has to choose his words carefully.

One can only wonder what he would have said had he not been careful. Yet, we are not surprised as this remark hatched out from the famed American media.  US policy over the past few decades has reduced countries like Iraq and Afghanistan into a testing ground for lethal weapons. So, American media believes that only Iraq or Afghanistan are supposed to suffer wars and destruction.

But American media isn’t the only one airing such views. On BFM TV (France), a commentator could be heard saying, “We are in the 21st century, we are in a European city and we have cruise missile fire as though we were in Iraq or Afghanistan, can you imagine?”

So, the Western media is ridiculing both Iraq and Afghanistan. But was it forgetting something? Well, Syria, is the country that the US and other Western allies rampaged less than a decade ago. So, another commentator appearing on BFM TV (France) said, “It’s an important question. We’re not talking here about Syrians fleeing…We’re talking about Europeans.”

Read more: By including Syria, Biden has given Putin a stick to beat him with

NBC News correspondent Kelly Cobiella echoed similar views. Cobiella said, “To put it bluntly, these are not refugees from Syria, these are refugees from Ukraine…They’re Christians, they’re white. They’re very similar [to us].”

"We are in the 21st century, we are in a European city and we have cruise missile fire as though we were in Iraq or Afghanistan, can you imagine!?” pic.twitter.com/SzSlJJ9JfR

And when it comes to blatantly racist coverage, Al Jazeera isn’t far behind either. A presenter sharing his views about the ongoing war and visuals of Ukrainians fleeing from their homeland said, “What’s compelling is looking at them, the way they are dressed. These are prosperous, middle-class people. These are not refugees trying to get away from the Middle East…or North Africa. They look like any European family that you’d live next door to.”

"What's compelling is looking at them, the way they are dressed. These are prosperous, middle-class people. These are not obviously refugees trying to get away from the Middle East…or North Africa. They look like any European family that you'd live next door to." pic.twitter.com/LnopOTaDrA

Again, you hear the same view. Deaths aren’t compelling. A humanitarian catastrophe isn’t compelling either. What is compelling is the fact that it is the Europeans who are facing all this. You see, global media showed empathy for immigrants coming from the Middle East and North Africa all this while. But they never really shed the White man’s privilege. They had assumed that Europeans will never face war or a crisis.

Even print media has been caught up by the growing racism in Western media. The Telegraph published a piece titled “Vladimir Putin’s monstrous invasion is an attack on civilization itself.”

The report laments, “They seem so like us. This is what makes it so shocking. Ukraine is a European country. Its people watch Netflix and have Instagram accounts, vote in free elections and read uncensored newspapers. War is no longer something visited upon by impoverished and remote populations. It can happen to anyone.”

This time, war is wrong because the people look like us and have Instagram and Netflix accounts. It's not in a poor, remote country any more. – Daniel Hannan pic.twitter.com/QqOoyWvpTg

Read more: It is official: Ukraine is holding citizens of other countries hostage, to secure its own well-being

On ITV (UK), a news correspondent could be heard saying, “The unthinkable has happened…This is not a developing, third-world nation; this is Europe!”

So, the agenda emerging in the Western media is clear-

So, the mask of liberalism has come down all of a sudden. And outrage over whites killing whites has replaced it in a shameless show of condescending racism.