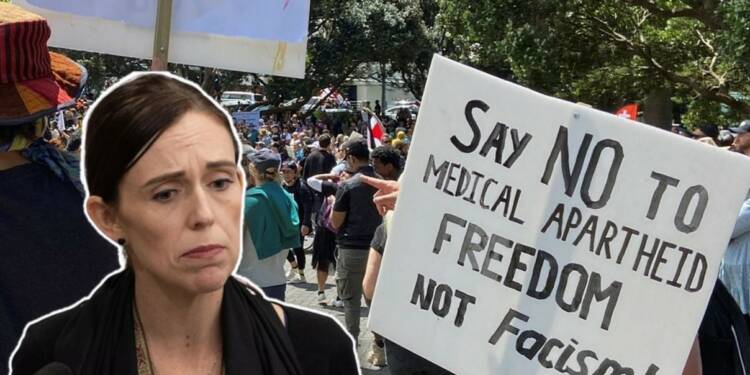 The world is rising against liberal political ideologies. Leaders viewed as ‘liberals’ are facing massive protests. It is pretty much like the sane population of all countries has had enough of toxicity. What began in Canada and found support in the United States and Australia has today become a mass movement in New Zealand. That’s right, inspired by the ‘Freedom Convoy’, the people of New Zealand have risen. Who have they risen against? Isn’t the answer obvious? Facing the wrath of the people of New Zealand is Prime Minister Jacinda Ardern – the blue-eyed girl of liberals around the world.

The protests outside New Zealand’s parliament in Wellington is swelling in size with each passing day. Thousands of people are holding a peaceful protest against Jacinda Ardern’s government and are demanding an end to inane Covid-mandates and the removal of Ardern from office.

According to the Telegraph, herb gardens have been planted, makeshift showers set up, and hot meals a day are served up for free three times a day by volunteers. There’s even a day-care tent. According to a protestor, “Jacinda has to go. She has eroded our freedoms.” Another said, “We want the mandates gone. They’re hurting innocent people and killing our businesses. This isn’t New Zealand.”

New Zealand has made it compulsory for government workers, including nurses, teachers, and the police to be vaccinated. Everyone is required to wear a mask, and private employers can impose vaccine mandates as well. On Tuesday, Jacinda Ardern got her police to move concrete traffic barriers forward by several hundred feet on three streets near the protest site. This resulted in a clash between the protestors and riot-shield wielding police.

What is MAGA? Make America Great Again? Yes, it is definitely a flagship campaign of former U.S. President Donald Trump.

In New Zealand, however, MAGA stands for ‘Make Ardern Go Away’.

And people are carrying MAGA posters all around the protest sites. Among the banners and placards decorated with slogans such as “End mandates, we go home” and “Freedom not fascism” were plenty of hats with the letters ‘MAGA’ on them.

Jacinda Ardern has, on her part, refused to meet the demonstrators and on Tuesday said she was concerned things were becoming increasingly violent.

Bad Time to be a Liberal

Around the world, people are rising against liberal authoritarianism. In Canada, innocent people were harassed by Justin Trudeau’s forces for expressing themselves and exercising their right to protest. An emergency was invoked by Trudeau in order to justify the shocking incarceration of conservative Canadians.

In the United States, Joe Biden has deployed the national guard to prevent a Truckers’ Convoy from setting camp in Washington DC. Around 25 separate convoys plan to join forces and converge on the nation’s capital, to replicate recent protests in Canada.

In New Zealand, Jacinda Ardern is increasingly looking to use force against peaceful protestors. The protest underway in Wellington, which is now getting replicated across the country, threatens Jacinda’s power. It can lead to her government being evicted, and that is a scenario the New Zealand Prime Minister wants to prevent by hook or by crook.

Jacinda Ardern would be making the biggest mistake of her life if she resorts to using brute force against the protestors. One in three New Zealanders supports the so-called Freedom Convoy, according to a recent Horizon poll. Jacinda would be digging her own political grave if she goes ahead with a forced eviction of the protestors.