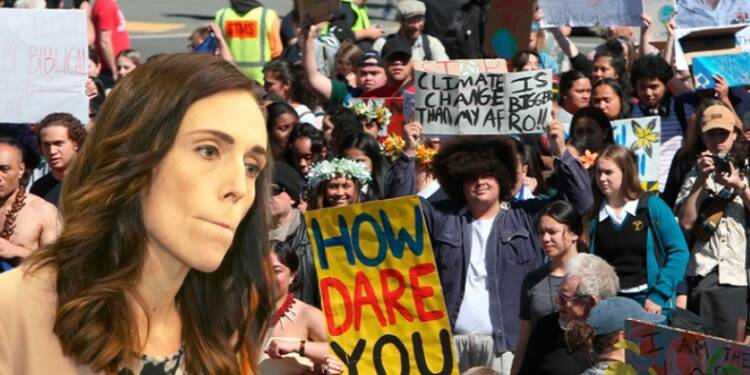 As the Trudeau administration in Canada faces the protest rally of truckers, now New Zealand is hit by a similar style freedom convoy protest rally. Hundreds of drivers clogged up Wellington in protest against vaccine and mask rules in the latest attack on Jacinda Ardern‘s hard-line COVID restrictions.

Vehicles driven from across the country blocked the roads into the capital and around the parliament as the demonstrators announced that they are not against vaccines, but rather oppose Prime Minister Jacinda Ardern’s hard-line pandemic policies. Due to this, the New Zealand‘s capital was partially brought to a standstill.

The protest mirrors a similar demonstration in Canada, where a freedom convoy began rolling across the country in January, protesting against the Trudeau administrations vaccine mandate for Canadian truckers.

What is the protest all about?

The protesters are demanding the return of pre-COVID freedoms, denouncing vaccine mandates, and attacking the Labour prime minister for her vaccine and mask rules. Demonstrators painted their vehicles with slogans denouncing the government’s COVID rules, which force people to wear masks in public places and show vaccine certificates to enter certain businesses. Protesters gather around New Zealand’s main parliament building, where several of them have now pitched tents and declared that they are in the city for a long haul.

One of the protesters said, “I am actually vaccinated but I’m against mandating people to be vaccinated. I think it’s disgraceful, forcing vaccination on people who don’t want it”. Several of the Wellington protesters carried Canadian flags, including an expatriate named Billy, who refused to tell his surname. He said, “I am just supporting the brothers in Canada, fighting for freedom over there”.

The protest rally has been largely ignored by New Zealand parliamentarians. According to local media, not one single lawmaker had gone to meet the crowd in contrast to some previous protest rallies. The local media also reported some face-offs between police and protesters.

Also, three arrests have been reported by the police, but officials say that the event has remained largely peaceful. One of the protesters said, “We’re here as long as it takes. It feels very intimidatory here today, it feels like the police are trying to incite violence but it won’t come from us”.

As New Zealand grapples with three-decade high inflation and a COVID-19 outbreak, the support for Prime Minister Jacinda Ardern has fallen to its lowest point. Despite being touted as New Zealand’s favourite prime minister by a considerable margin, Ardern’s popularity dropped to 35% in the latest 1 News Kantor poll, according to The Guardian. Worsening living conditions of New Zealanders, rising inflation & cost of living, Jacinda’s Muslim appeasement politics and her soft stance towards Islamic extremism are some of the reasons for her decreasing popularity and support.

While she has been a colossal failure on the Foreign Policy front, most people are more influenced by domestic issues. Being a failure on both the domestic and foreign policy front, she has made sure that New Zealand reaches its worst times. Also, on one hand, she calls herself liberal, pro-democracy and quotes freedom of speech and expression; on the other hand, she shows reluctance and ignorance towards peaceful protesters of her own country. That’s the level of hypocrisy she carries.