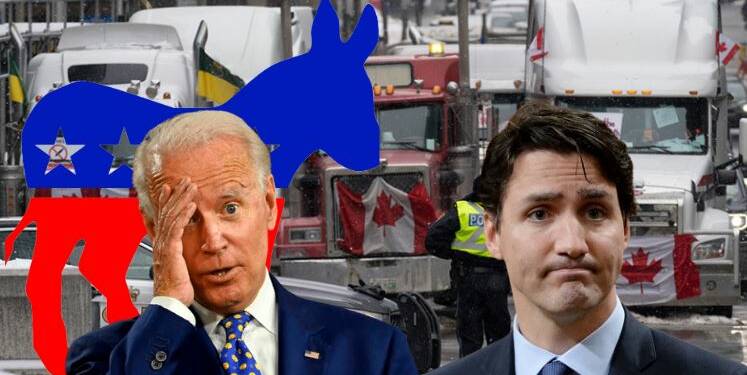 Democrats may face a rout in this year’s midterm elections, which will take place in November. Already, the Senate is split 50-50 between Democrats and Republicans, while Democrats hold a 10-seat majority in the House. Republicans just need six seats to take control of the House of Representatives. That’s how simple it’ll be for Republicans to oust Democrats from the House. Indeed, Democrats’ own admission is that the midterm polls will be a disaster that the blue party hasn’t seen in a long time.

They realise that it will be a total rout and depending on Joe Biden will only worsen the situation. Not only a rout in the upcoming mid-term elections, but even before that, a Canada style ‘Freedom’ protest could hit the streets of the major cities and even the capital, Washington DC. The larger group of Democrats have realised that now it is not the time for any virtue signalling and pushing extreme leftist, woke and authoritarian agendas. As the November elections approach, Democrats across the country are scrambling to reverse course on COVID-19 limits.

With the exception of the White House, Democrats at all levels are signalling their support for resuming normalcy, despite polls showing that Americans are tired of coronavirus restrictions, which Republican states have mostly eliminated.

According to a recent Monmouth University poll, 70% of Americans believe it is hightime for the country to move on from the pandemic, and fewer Americans support COVID-related mandates. According to the poll, President Biden’s approval ratings on handling COVID, which were previously strong, have plummeted to 43 percent approval and 53 percent disapproval.

Democrats are lifting mask mandates and lockdown restrictions ONLY because they are worried about the midterm elections.

Let’s be clear: the data on masking and vaccines didn’t change, the polling for Democrats did.https://t.co/77x66MqR9X

In opposition of the government, several Democrats who formerly led the way in issuing lockdown orders and requirements during the pandemic are now lifting restrictions in their states ahead of the November elections. As coronavirus infections fall in the United States, some Democratic-controlled states have declared plans to abolish mask regulations in indoor areas including schools. The declarations point to a policy of recognising Covid-19 as a normal part of life. In the early days of the epidemic, mask-wearing became a political struggle in the United States.

Governor Ned Lamont of Connecticut announced that after February 28, school boards should no longer require students to wear masks. Governor John Carney of Delaware said that the state’s indoor mask requirement would expire on Friday, and that masks in schools would be phased out by March 31.

New York Governor Kathy Hochul said that the state’s COVID-19 law requiring face coverings in most indoor public venues will be repealed, but that the regulation will remain in place for schools. Illinois has made the same announcement.

Gov. Dan McKee of Rhode Island announced on Wednesday that the state’s indoor vaccine-or-mask requirement will be lifted this week, followed by the school mask requirement in March. The school mask law will be phased out at the end of the month in Massachusetts, which is normally considered a blue state but has a centrist Republican governor.

Everyone is scared of ‘Mid-terms’ and the ‘Freedom’ conveys

Canadian PM Justin Trudeau is on the back-foot since the Canadian truckers’ protest rally against the government’s vaccine mandate rule began. The vaccine mandate rule imposed by the Canadian government came into effect on 15th January 2022. According to the mandate, any unvaccinated Canadian truck driver re-entering Canada from the US will have to go through a COVID-19 test and also quarantine themselves.

Just as the Trudeau administration in Canada faces the protest rally of truckers, now New Zealand is hit by a similar style freedom convoy protest rally. Hundreds of drivers clogged up Wellington in protest against vaccine and mask rules in the latest attack on Jacinda Ardern‘s hard-line COVID restrictions.

While these are inherently very compliant societies, the fact that there have been such reactions has sent shivers down the spine of Democrats. With the mid-terms approaching, nothing can be worse than large scale protests which increase in intensity with every passing day. Therefore, fearing a Canada style ‘Freedom’ protests, state democrats and party at large have abandoned Joe Biden.

The Centers for Disease Control and Prevention (CDC) continues to urge mandatory masking indoors and in schools, and Biden has opted to follow their example. However, in the backdrop of all that we discussed above and the larger trend of the Democrat ruled states reversing their approach, it is quite obvious that Joe Biden and his administration are the last Democrats in support of mask mandates and other restrictions.