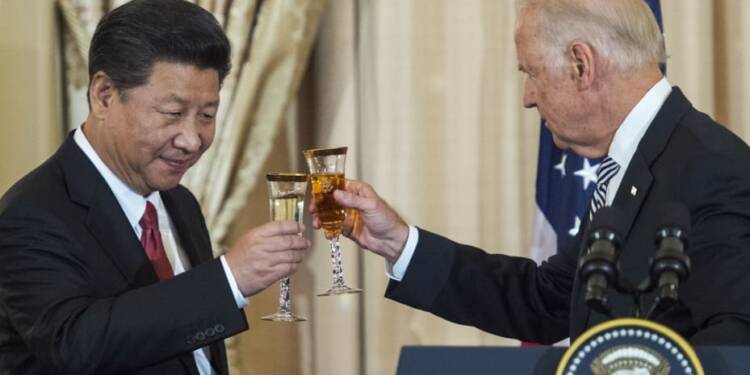 As the world focuses on the war in Ukraine, Joe Biden is going above and beyond to assist China. Already out of his mind, the 46th President of the United States has made it his life’s mission to fuel China’s growth as an economy that will, in the coming years, overtake the United States as the world’s largest.

From 2016 to 2020, the United States of America experienced its golden era vis-a-vis China. Donald Trump severed ties with the Dragon, bringing the Communist country to its knees, pleading for mercy.

But Joe Biden is recoupling with China. He is wedding the American and Chinese economies in an inseparable manner, and in the long run, the devastating consequences of the same will become irreparable.

The Biden administration has removed trade tariffs on at least 352 goods out of the 549 that had been sanctioned by President Donald Trump. Despite the business community in the United States desperately wanting to align with China, the Republican President refused to budge.

Trump had hit China with tariffs on $360 billion worth of goods in the midst of a trade war between Washington and Beijing. However, he had also allowed certain exemptions to the tariffs. But as a farewell slap to China, the 45th President refused to extend waivers for exempted products imported from China.

The 2020 expiration of the waivers meant that companies had to again start paying a tax to import a variety of goods from China.

For the past two years, companies exporting such goods have been paying additional tariffs to the American government. Trump had put in place tariffs to discourage American companies from buying Chinese goods. However, now that Joe Biden has decided to exempt over 350 Chinese products from the stringent tariff regime, Xi Jinping’s regime has much reason to rejoice.

Do you know what is the most important policy priority for the Biden administration?

It is normalising ties with China. It is for this reason that Joe Biden recently assured Xi Jinping that the U.S. does not seek conflict with the Communist nation. He also vouched for the fact that Washington does not support Taiwan’s independence.

Joe Biden’s overtures to China come despite the fact that Beijing has not complied with the conditions of the interim trade deal signed during the Presidency of Donald Trump. For the year 2020-21, China had committed to purchase $200 billion of additional US exports. Guess how much of that additional purchase China actually made?

Nonetheless, the Biden administration is going out of its way to restore trade ties with China to pre-Trump levels. Essentially, Joe Biden is undoing all of Trump’s gains and leading a crusade to inextricably link the American and Chinese economies.

The Chinese economy has many fault lines, and it is under tremendous stress. Furthermore, there are innumerable supply chain issues that arise out of world economies depending disproportionately on China. This was best seen during the height of the Covid-19 pandemic when global supply chains centred around China went haywire.

Despite such glaring evidence, Joe Biden is recoupling with China. This begs the question, is he the President of the United States or a CCP stooge occupying the White House?