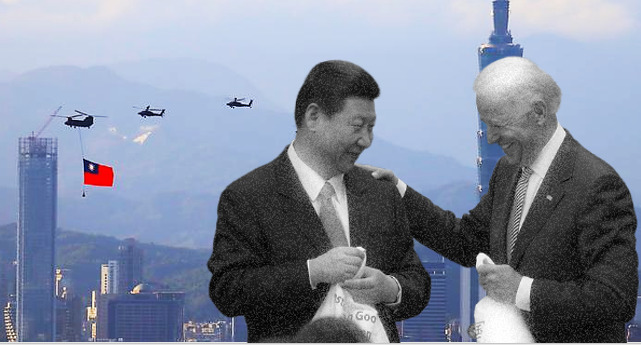 In a recent call with Xi Jinping, Joe Biden prostrated to his master’s will, segue into the Chinese Communist Party emerging victorious.

The United States of America – purportedly the world’s most powerful country with the largest economy has just fallen at the feet of China. This fall from grace has been effectuated by one man alone, and his name is Joe Biden.

Joe Biden has surrendered to Xi Jinping on five counts. These are as follows:

Oh, by the way, none of these points were mentioned in the White House’s readout of the call between the two leaders. It was China that humiliated the United States by revealing details of Biden’s surrender.

A Cold War with China would have resulted in the toppling of the Chinese Communist Party regime or the balkanization of China. That’s what happened at the end of the Cold War with the Soviet Union. Wouldn’t the world be a better place without the CCP? It would.

But by removing the threat of a Cold War from the equation, Joe Biden has taken to mollycoddling the CCP. Now, Xi Jinping has nothing to fear from the United States of America for at least the next two years.

U.S. Commits to Respecting the CCP Regime and not Toppling It

The refusal to engage in a Cold War with China was merely a precursor. Here’s the main talking point.

During his call with Jinping, Biden assured the Chinese President that the U.S was not looking to execute a regime change in China and that it was happy with the way the CCP was functioning.

What this means is that the U.S. has submitted before the will of a brutal regime that violates the human rights of Chinese citizens on a daily basis. Now, the CCP can, rest assured, continue arm twisting its own citizens and countries in the Indo-Pacific since it has the stamp of authority of the Biden administration to support it.

Alliances are not Against China

Donald Trump ensured the setting up of Quad along with India, Japan, and Australia to contain and challenge China militarily and in strategic sectors. Joe Biden has undone the Quad’s core mandate. Australia is set to be delivered with nuclear submarines under the AUKUS alliance.

But again, Joe Biden told Xi Jinping in unequivocal terms that “the revitalization of its alliances is not targeted at China.”

In the call with Jinping, Biden said that the U.S. “does not support ‘Taiwan Independence.”

The Chinese Foreign Ministry quoted Joe Biden as saying that the U.S. is ready to have candid dialogue and closer cooperation with China, should the US stay committed to the one-China policy, and effectively manage competition and disagreements to ensure the steady growth of the relationship. In fact, Xi Jinping warned Joe Biden on the Taiwan front, saying that mishandling the Taiwan question will have a disruptive impact on bilateral ties.

Joe Biden trembled after the warning and abandoned Taiwan almost immediately. Rest assured, the U.S. will not come to the military aid of Taiwan in the event of China invading it, at least until Joe Biden is President.

U.S. Has No Intention to Seek a Conflict with China

This really comes as an addendum to the previous assurance that  Biden gave to Jinping. The only front which could trigger an armed conflict between China and the United States was Taiwan. Having assured China that the U.S. will not intervene militarily to aid Taiwan counter Chinese invasion, Joe Biden made it particularly clear to Beijing that he does not want to fight the Communist nation.

Joe Biden is Richard Nixon 2.0. The only difference is that Nixon built ties with China whilst Biden is making America a proxy state of the CCP.