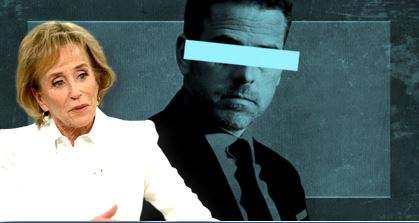 The Biden family is rooting for a second term for Joe Biden. However, the biggest hurdle they face in their way is the history of Hunter Biden’s murky business dealing. Now, the more they try to defend Hunter, the bigger their problem gets.

Recently, Joe Biden’s sister Valerie Biden Owens was interviewed by CBS News’ Gayle King. The interview was supposed to promote Valerie’s new memoir ‘Growing Up Biden.’ However, one thing led to another and Hunter Biden came up for discussion. An uncomfortable Owens ended up blaming Trump for exposing her nephew Hunter Biden. In the process, she made it clear that there is something really murky in Hunter’s business dealings and Trump has managed to expose him.

During the interview, King asked whether the President’s son is a liability. The question was self-explanatory. The Republicans have been targeting Hunter Biden for his murky business dealings that had allegedly abused Joe Biden’s position as then-Vice President. Currently, Hunter Biden is under a federal investigation. So, to any political analyst, this would appear like a political liability.

Owens however did what most politicians would do — avoid answering the question and make an emotional statement. She said, “The only race I wasn’t enthusiastic about Joe getting involved in was the 2020 presidency.” She added, “Because I expected and was not disappointed that it would be ugly and mean and it would be an attack on my brother Joe personally and professionally because the former president is very intent on bringing my brother down.”

This was an attempt by Owens to avoid talking about the Hunter Biden controversy. This is why she kept beating around the bush.

Yet, King finally asked the big question — What did it have to do with Hunter Biden?

So, Owens again avoided talking about Hunter’s murky business dealings. She said, “I assumed from the beginning that the former president and his entourage would attack my brother by going and attacking the family.” She added, “He thought that the weak link would be to attack my brother’s child.”

And then, she made one emotional remark about Hunter Biden’s history of drug addiction. Owens said, “I am so grateful that he has been able to walk out of hell.”

King again pointed out that the main issue concerned Hunter Biden’s business dealings and not his past of addiction to drugs.

Now, Owens’ evasive replies and the tendency to blame Donald Trump when asked about Hunter Biden leads us to two conclusions-

Remember, there is a lot of material out there in the public domain against Hunter Biden. Hunter Biden’s MacBook that was left abandoned at a Delaware computer store revealed several scandals including his appointment to the Board of Directors of Ukraine’s Burisma Holdings, his business dealings with the Chinese, and receipt of millions of Dollars from several individuals including former Moscow Mayor’s wife and a Kazakhstan investor.

The issue was conveniently buried under the carpet by the mainstream media, in the run-up to the 2020 presidential polls. However, the issue has now cropped up again and all that the Biden family can do is just blame Donald Trump.