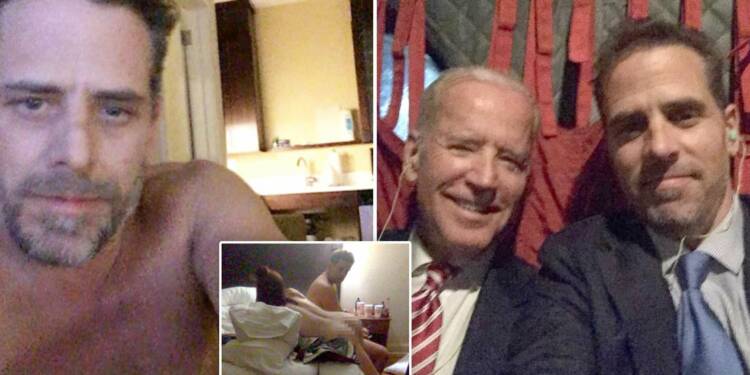 Last October, when the ‘New York Post’ broke the story of Hunter Biden’s financial shenanigans in Ukraine and China; the Big Tech along with the Democrats and the corporate media scrambled to mask the smoking gun by declaring it a “Russian conspiracy.”

Facebook censored the story. Twitter went a step ahead and restricted the users from even posting the links to the NYpost story altogether. Facebook vowed to fact-check the claims revealed in independently verified leaked e-mails obtained from Hunter’s laptop; however, the results were never released. Twitter’s CEO Jack Dorsey later apologized on the micro-blogging website for cunningly banning the NYpost story.

All in all, the Big Tech managed to keep Joe Biden’s election campaign afloat through its massive disinformation campaign last year. However, a recently published book on Hunter Biden’s sensational laptop scandal has re-ignited the issue revolving around the Media-Democrats-Big Tech nexus that kept the Hunter story from reaching the masses right before the last year’s elections.

POLITICO national political correspondent Ben Schrekinger’s new book, “The Bidens: Inside the First Family’s Fifty-Year Rise to Power,” has already hit the bookshelves. The book talks about Hunter’s laptop that led to the unraveling of his dalliances with prostitutes, and his shady business dealings in Ukraine and China that he benefited immensely from by using his VP father’s name. It is the first time that a mainstreamed author has attempted to bring forth the facts previously buried by the left-liberal nexus.

The Hunter Biden story was undermined by the liberal platforms on the basis that it could be fabricated by Russia with intentions to interfere in the US elections, and that Rudy Giuliani could be playing in the hands of foreign powers that wanted former President Donald Trump’s return to the White House. Questions were raised over the credibility of the sources. But, now as Schrekinger’s book is out, the issue regarding lack of credibility can be put to rest. The evidence of the genuineness was already there; however, liberals do not count right-wing media outlets amongst their credible sources of information and instead love to call their findings as propaganda and “not real stories.”

Ben Schrekinger in his book has independently confirmed that the so-called “Russian conspiracy” theory is an outright falsehood and that the leaked emails were recovered from Hunter’s laptop only. An excerpt from his book reads, “A person who corresponded with Hunter in late 2018 confirmed to me the authenticity of an email in the cache.” Another person who corresponded with Hunter in January 2019 confirmed the authenticity of a different email exchange with Hunter in the cache. Both of these people spoke on the condition of anonymity, citing fears of being embroiled in a global controversy.”

“A third person who had independent access to Hunter’s emails confirmed to me that the emails published by the New York Post related to Burisma and the CEFC venture matched the substance of emails Hunter had in fact received. (This person was not in a position to compare the published emails word-for-word to the originals.)”, another excerpt read.

The corporate media and Big Tech buried the story because a group of former CIA officials had refuted the claims as outright “Russian disinformation.” However, the liberal media conveniently missed out on the fact that the CIA officials have themselves stated about the lack of evidence regarding Russian involvement. The intelligence officials admitted in their letter that “we do not know if the emails are genuine or not,” and also admitted that “we do not have evidence of Russian involvement.”

Read More: Another explosive story about Hunter Biden’s financial dealings with China is out

The censorship of unparalleled gravity was imposed on two stories that were broken by NYpost on the 14th and 15th of October last year. The first story underscored how Joe Biden abused his powers as VP to benefit a company that had his son Hunter on its board. The company would pay junior Biden a whopping $50 thousand a month for the mere qualification of being a close relative of the then-VP Joe Biden. The other story detailed how Hunter Biden and Joe Biden’s brother Jim Biden had pursued a business deal in China that very likely included a “profit participation” by the sitting VP.

The two stories could have grave ramifications for Joe Biden’s election campaign that explains unprecedented censorship at the hands of big tech and corporate media. Hunter’s laptop, from which the leaked emails were first unearthed, is screaming for attention and acknowledgment. The media outlets that dared to cover the story were either slapped with censorship or faced an outright ban on social media platforms. Now, as Schrekinger’s book is out, the Hunter Biden story needs to be mainstreamed to the extent that every legit American voter gets a bird’s eye view of how Biden’s family is deeply mired in innumerable and irrefutable conflicts, the conflicts that seriously undermine the national interests of the United States of America.