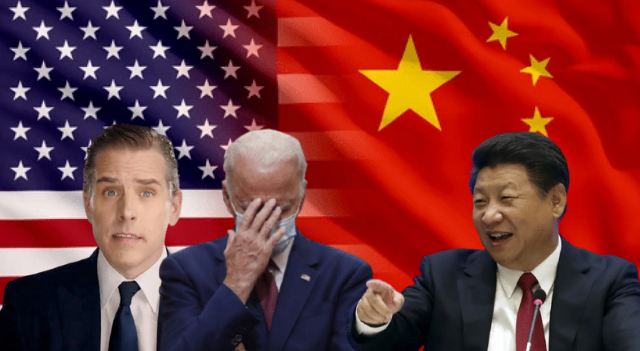 Hunter Biden is a notorious man. Hunter’s daddy, Joe Biden knows this. Jill Biden, Hunter’s mom knows it too. Everyone close to Hunter Biden knows that the man is dirty. But among many of the Biden family’s friends who know Hunter is a naughty, corrupt and dirty man, the Chinese Communist Party knows it best. The Biden family and China have been in bed with each other since before 2010. We are talking about the Obama Presidency here when Joe Biden was Vice President, and Hunter Biden used his father’s position to make massive profits around the world. But now, one card after the other is falling, and it seems China is behind it all.

When Joe Biden became President, China thought it had a friend in the White House. However, public perception of China in the United States is highly negative. Leave alone Republicans and Conservatives, even Democrats are no fans of China and view the Communist nation as an imminent threat to the United States. This public pressure against China has forced Biden’s hand into taking some anti-China moves which the CCP has hardly been appreciative of. So, the CCP has taken upon itself the task of exposing the Biden family’s dealings with it over the past 10 years.

Many of you would remember Joe Biden as saying China’s growing dominance of cobalt is a stumbling block to America’s attempts at shifting from petrol gas to electric cars, as cobalt is a key ingredient in electric car batteries. Well, guess what? As it turns out, Hunter Biden had gifted one of the world’s largest cobalt mines to China in 2016, although the deal was struck when Joe Biden was still Vice President.

According to a report by the New York Times, an investment firm that counts Hunter Biden among its founders helped a Chinese company purchase one of the world’s most lucrative cobalt mines from an American company. The company completed a deal in 2016 that saw a Congo cobalt and copper mine transfer from American company Freeport-McMoRan to Chinese outfit China Molybdenum for the sum of $2.65 billion.

Hunter Biden continues to hold a 10 per cent stake in the Chinese private equity firm Bohai Harvest RST Equity Investment Fund Management Co. (BHR Partners). What is even more shocking is that BHR Partners is no ordinary private equity firm. This fund was actually founded in 2013 by Bohai Industrial Investment Fund Management Co., Ltd., which is itself controlled by the Bank of China, one of the four biggest Chinese State-owned commercial banks. This is the same deal that sold the Cobalt mine to the Chinese Communist Party.

Hunter Biden faces severe allegations of misusing the Vice Presidency of his father, Joe Biden, to land lucrative deals for himself world over, from Ukraine to China. China knows just how deeply involved Hunter Biden was with it until his father became President this year. Now, the CCP has a gun to both Hunter and Joe Biden’s heads. And it is pulling the trigger, one bullet at a time. This is Joe Biden’s punishment for not completely toeing the CCP line as President of the United States of America.