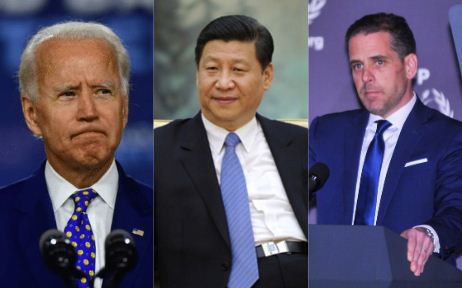 The Biden administration is now about to come at the helm of affairs in Washington D.C. And while Biden has repeatedly promised to take a tough stand against China, the Communist nation doesn’t seem very bothered. Biden keeps saying that he will co-operate with US allies in the Indo-Pacific region and marginalise China. But the Chinese government or even the Chinese state-owned media doesn’t generally criticise Biden.

There is a sense of confidence in China about Biden. Even China’s state-run media keeps predicting better ties with Biden at the helm of affairs. So, why is China so confident about Biden? It seems that Beijing’s leverage over the US President-elect allows it to keep the Democrat leader in check. We are talking about the investigation into Hunter Biden’s business dealings with China.

Joe Biden’s son, Hunter Biden is coming into the spotlight, right ahead of the White House transition. As for Hunter Biden, he remained a target of the Trump campaign throughout the US Presidential poll battle last year. President Donald Trump alleged that Hunter Biden has used his influential position to secure China’s financial backing for his investments.

Since China has been at the centre of US foreign policy, the allegations were quite sensational. But according to CNN, a person with knowledge of the matter said that investigations into the matter had gone covert because the Justice Department guidelines prohibited overt actions that could influence elections. Also, Trump had alleged that the US media wasn’t properly reporting about Hunter Biden’s business deals.

But now the US Presidential polls are over. So, investigations have gone overt. The person with knowledge told CNN that federal prosecutors in Delaware associated with the IRS Criminal Investigation agency and the Federal Bureau of Investigation (FBI) are taking steps like issuing subpoenas and seeking interviews.

Hunter Biden himself issued a statement reading, “I learned yesterday for the first time that the U.S. Attorney’s Office in Delaware advised my legal counsel, also yesterday, that they are investigating my tax affairs. I take this matter very seriously but I am confident that a professional and objective review of these matters will demonstrate that I handled my affairs legally and appropriately, including with the benefit of professional tax advisors.”

What we presently know about Hunter Biden’s business interests in China is that he accompanied the then Vice President Joe Biden on China trips. For example, he tagged along on Air Force Two with his father during a December 2013 visit to China. On this visit, Hunter met Chinese financier Jonathan Li, who ran the private-equity fund Bohai Capital. Hunter and his partner Devon Archer had earlier discussed a plan with Li for investing Chinese cash outside the Communist nation.

During the 2013 visit, Hunter had even arranged a handshake between Li and the then US Vice President at the hotel of the American delegation. Moreover, as per text messages obtained by The New York Post report, Hunter’s former business associates had discussed getting “Joe involved” in their venture with a Chinese energy company- CFEC. The alleged purpose was to make the venture seem like a “truly family business.”

Be that as it may, we are certain that the full picture is not clear. The Chinese government, on the other hand, may have greater clarity than the United States administration because Beijing tends to keep a tab on all big business activities. In fact, last year, Trump had even publicly urged China to investigate the Bidens.

China had then not complied with Trump’s requests. But now Beijing would be confronting Joe Biden directly as the US President. If Biden tries to go after China in the Indo-Pacific, then Beijing might start mounting pressure on the White House by launching investigations and initiating other such vindictive actions. This way, Beijing can check the US President-elect.

Also, China has a deep influence in the American media. Right now, Western-liberal media is pro-Democrat, but China can easily make it anti-Biden if it wants to. Spotlight on Hunter Biden is thus China’s leverage with which Beijing would want to ensure that Joe Biden falls in line or falls by the wayside.

Has Angela Merkel received kickbacks from China to get the Sino-European investment deal done?