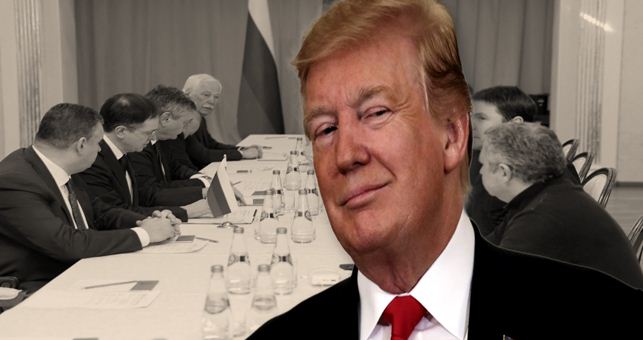 When in power, former US President Donald Trump was ridiculed and slandered. But at this time when Russia is up against Ukraine, the fact remains that Trump had tactfully avoided the unnecessary war during his tenure.

The Trump administration was quite clear and blunt about this- China is the main threat that the US has to combat. And therefore, resources were diverted towards the Indo-Pacific and containment of China. In 2020, the Trump administration even reduced the number of troops in Germany, one of its key-NATO allies.

The Trump administration had even made it clear that the troops were being “postured appropriately” to meet the China threat.

So, Russia never felt that the US was trying to disturb the balance of power in Eastern Europe. For the sake of focusing on China, Trump avoided the Ukraine issue and never escalated it. So, Russia simply didn’t have a reason to react.

Throughout his tenure, Trump struck a balance that Biden has failed to achieve. Donald Trump never appeared to provoke Ukrainian President Volodymyr Zelensky, and when the former US Ambassador to Ukraine Marie Yovanovitch had a fallout with Trump in the year 2019, she was ousted immediately.

Trump was never seen as getting hawkish or unnecessarily aggressive on the issue. Biden, on the other hand, is seen actively backing and instigating the Zelensky government in Ukraine. This is why Russia acted in starkly different ways.

Read more: 50 reasons why Donald Trump is coming back to power

For Russia, one of the main fears is Western military assistance to Ukraine. It wants to avoid any military involvement by the US and other Western powers in its neighbourhood.

During the Trump era, military aid to Ukraine was frozen. Despite the US Congress appropriating military assistance for Ukraine, Russia’s neighbour wasn’t getting any significant military supply from the West.

Again, for Russia, it meant that there was no imminent threat in its neighbourhood and Putin didn’t have to react unusually.

Trump placed the sensitive Ukraine matter in the hands of his lawyer Rudolph W. Giuliani. He was made the point of contact for Zelensky. Giuliani as such made no imprudent remarks that could have created any friction between Russia and the US or Ukraine.

Russia, on its part, realised that Giuliani was not doing to ramp up any hawkish sentiment against Moscow on the Ukraine front. And it was because of this perception that Putin didn’t feel the need to take the military route.

Read more: Donald Trump has turned out to be the biggest opposition for Justin Trudeau and icon for Canadian conservatives

Let’s face it- Trump had nothing to hide in Ukraine. So, he didn’t need to appease the Ukrainian government or make Zelensky feel that the US was giving extraordinary attention to Kyiv.

President Joe Biden, on the other hand, faces a politically contentious issue- the Hunter Biden files. There are serious corruption allegations regarding Hunter Biden’s financial dealings in Ukraine and China. Hunter Biden is also under a federal investigation. And within the United States, this has been a major political issue.

Biden doesn’t want things to blow up if any information comes out of Ukraine. This is why he is giving too much attention to Ukraine, which Putin perceives as a major threat. Ultimately, one thing led to another and as it stands, Russia is at war with Ukraine.

The ongoing war has claimed many lives and created a major threat to the global economy. Trump, however, with his prudent policies never had to endure such a situation during his four years in power.