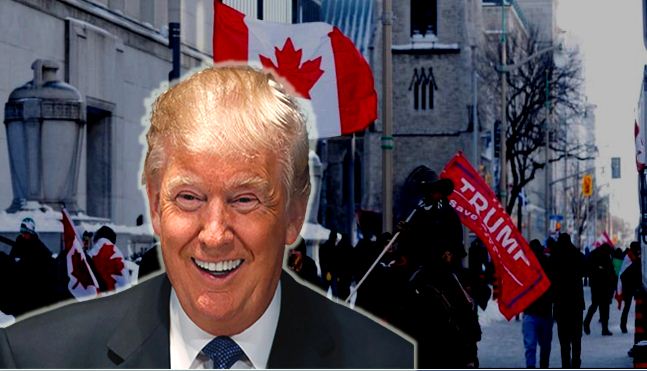 Former President Donald Trump is an inspiration for Americans and even people around the world. In India, for example, Donald Trump has many fans. India, you see, is a vibrant, mature and secure democracy. Canada, on the other hand, is an insecure, fragile and authoritarian democracy. Don’t believe me? Well, Justin Trudeau – the blue-eyed boy of liberals around the world, has just promulgated an Emergency and Martial Law in Canada. This gives his government unfettered power to muzzle the free voices of protestors belonging to the ‘Freedom Convoy’ while throwing them all behind the bars.

But the Conservatives of Canada are hardly going to be shoved around by Trudeau’s police. Canadian Conservatives have risen, and there is no stopping them now. Guess who they are taking inspiration from? The Former president of the united states, the inimitable, Donald Trump. Earlier this month, Donald Trump had joined the chorus in support of the ‘Freedom Convoy’ and Canadian truckers. He lambasted Justin Trudeau’s brutal regime, saying, “The Freedom Convoy is peacefully protesting the harsh policies of far-left lunatic Justin Trudeau who has destroyed Canada with insane Covid mandates.”

Donald Trump has become an icon for Canadian conservatives. You see, the problem with Canada’s Conservative party is that it has never really been able to become the voice of patriotic and freedom-loving Canadians. The Conservative party has no agenda, is riddled with factionalism and is simply incoherent.

Until recently, it was led by a man called Erin O’Toole, who let’s just say, is a disaster in more ways than one. He was recently sacked as the Conservative party’s leader for “flip-flopping” on issues of concern. As I said, the Conservative party is incoherent. The thing with Canadian citizens who identify themselves as Conservatives is that they are no longer willing to be led by an inept party.

So, they have decided to adopt Donald Trump as an inspiration. It is, therefore, not surprising to see protestors from the Freedom Convoy carrying pictures of Trump and calling out his name. He has become a symbol for Canadian conservatives who are sick and tired of Trudeau’s far-left domestic policies.

Donald Trump is returning the favour. He is now exporting American conservatism to Canada. Reportedly, numerous American conservatives are taking part in the ‘Freedom Convoy’ protests, while many Trump supporters are funding the movement. Speaking to Fox Network, Trump even said, “I see they have Trump signs all over the place and I’m proud that they do. But that’s what happens, you can push people so far and our country is a tinderbox too, don’t kid yourself. And there are plenty of [people from] our country up there right now.”

🇺🇸 🇨🇦President Trump is on the Truck Freedom #Convoy Train!

"We want those great Canadian truckers to know that we are with them all the way" – Trump#TruckersForFreedom2020 #TruckersConvoy2022 pic.twitter.com/HTscM0clFo

Meanwhile, businessman Mike Lindell,  a staunch supporter of Donald Trump and CEO of MyPillow was stopped by Canadian authorities on his way from the United States to join the Freedom Convoy in Ottawa. This shows how Donald Trump and his supporters are actively looking to provide all support needed to the Freedom Convoy. All this while Justin Trudeau dons the fascistic cap and tries to stop such aid from reaching the protestors.

Sooner or later, the Conservative party of Canada will have to toe Donald Trump’s line. It has been behaving like a headless chicken for far too long. Now, with Trump setting the agenda for Canadian patriots, the Conservative movement in the North American country will witness an upswing. and seemingly Trump’s ideology is now crossing the United States’ borders!