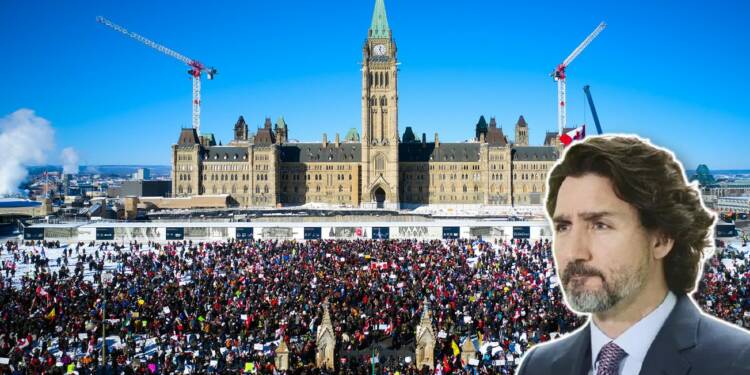 Canadian PM Justin Trudeau is on the back-foot since the Canadian truckers’ protest rally against the government’s vaccine mandate rule began. The vaccine mandate rule imposed by the Canadian government came into effect on 15th January 2022. According to the mandate, any unvaccinated Canadian truck driver re-entering Canada from the US will have to go through a COVID-19 test and also quarantine themselves.

According to the truckers, this vaccine mandate will create fuel inflation and a shortage of commercial truck drivers. This mandate by the Canadian government will create some serious issues like supply chain constrains, inflation and unemployment. It will disrupt the trade between the two countries and affect the livelihood of many citizens dependent on this sector. The decision is also destined to badly affect the Canadian economy.

As per the media reports, Canadian Prime Minister Justin Trudeau and his family have been moved from their home in Ottawa to an unknown secret location amid security concerns. The decision was taken after a large-scale protest opposing Covid vaccine mandates converged on Parliament Hill. Thousands of truckers and other protesters gathered in Ottawa on Saturday to protest vaccine mandates, masks and lockdowns, with some carrying signs to display anti-vaccine statements.

The PM’s itinerary for the day usually says he is in Ottawa if he’s at home, but on January 29 it said “National Capital Region” amid a report he’s been moved to an undisclosed location, according to a report by Associated Press.

What started as truckers protest rally against a vaccine requirement for cross-border truckers movement has now grown into a large demonstration against the Trudeau government’s COVID regulations and restrictions.

On January 30, Trudeau tweeted, “Islamophobia is unacceptable. Full stop. We need to put an end to this hate and make our communities safer for Muslim Canadians. To help with that, we intend to appoint a special representative on combating Islamophobia”. On Friday, Trudeau told media that he was concerned that the protest would turn violent. He also said that the protesting convoy represented a small fringe minority, who do not represent the views of Canadians.

Trudeau is busy talking about unnecessary and less important issues like Islamophobia when the real issues like unemployment, supply chain constrains, inflation, and others are badly affecting the livelihood of Canadian citizens. It is the decisions and priorities of Trudeau, that are responsible for the large-scale protests currently going on in Canada.

Trudeau has simply forgotten the real issues of the citizens and is busy pushing his leftist and liberal agenda. This shows that he is completely disconnected from the real problems of Canadians. That’s the reason for his continuously falling popularity and approval ratings. If Trudeau continues like this, it’s for sure that he will suffer in the upcoming elections and may even see a complete collapse of his political career.