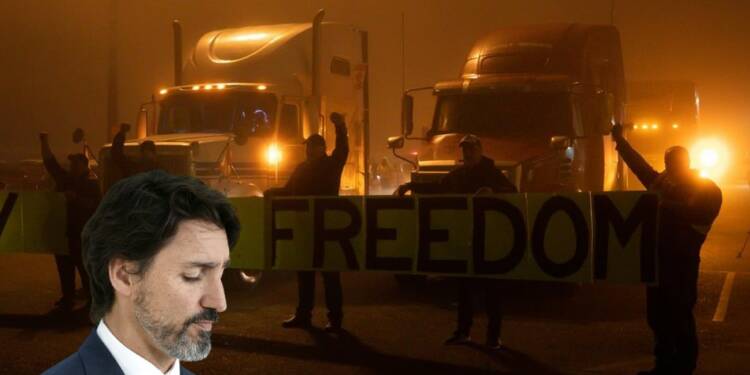 Canada is currently struggling with a high number of COVID-19 cases due to the rapid spread of the omicron variant and the failures of Justin Trudeau’s government in containing the virus and managing the pandemic. Because of Trudeau’s mismanagement and to counter the narrative of their failures, the Canadian government recently announced a vaccine mandate rule for the truck drivers who transport goods between the US and Canada.

In response to this, many Canadian truckers on Sunday organized a protest march from Vancouver to the Canadian capital city of Ottawa, against the Canadian government’s vaccine mandate rule. The trucker’s convoy is scheduled to reach Ottawa by 29th January.  According to the truckers, this vaccine mandate will create fuel inflation and a shortage of commercial truck drivers.

The vaccine mandate rule imposed by the Canadian government came into effect on 15th January 2022. According to the mandate, any unvaccinated Canadian truck driver re-entering Canada from the US will have to go through a COVID-19 test and also quarantine themselves.

According to the estimates of the Canadian Trucking Alliance (CTA), about 32,000 or 20% of the total 160,000 truck drivers from Canada and the US will be affected and taken off the road because of this mandate. Also, many industry lobby groups have warned that if the truck drivers are taken off the road because of this vaccine mandate, it would result in a severe driver shortage. The driver shortage will further increase fuel inflation, which is already at a three-decade high.

This mandate by the Canadian government will create some serious issues like job losses and unemployment. It will disrupt the trade between the two countries and affect the livelihood of many citizens dependent on this sector. The decision is also destined to badly affect the Canadian economy.

The Canadian government says that the reason for bringing this mandate is to control the COVID-19 caseload and manage the entry of COVID positive people from the US into Canada, but the true reason is that the Canadian government and Trudeau administration want to hide their mismanagement of the pandemic and the failure of various lockdowns that they imposed on the Canadian people one after the other. They want to counter the narrative of their failure in the implementation of the COVID relief program and the huge losses that the Canadian economy and people suffered due to the COVID lockdowns.

Read More: Trudeau’s horrendous management of the Covid crisis has closed businesses and drove people to the verge of penury

Read More: Trudeau has chosen to let Canadians die due to Covid-19 rather than asking PM Modi for vaccines

Canada failed on pre-pandemic preparation, stumbled in mid-pandemic responses, and continues to lack a clear end-of-pandemic game plan. On the one side, the Canadian economy and its people are still suffering from the shocks of the COVID lockdowns imposed by the Government and on the other hand, the Canadian government is busy imposing restrictions that would further be devastating for the citizens. There lies enough possibility that this protest by the truckers of Canada is just the beginning and there could be many more protests from other sectors of the economy.