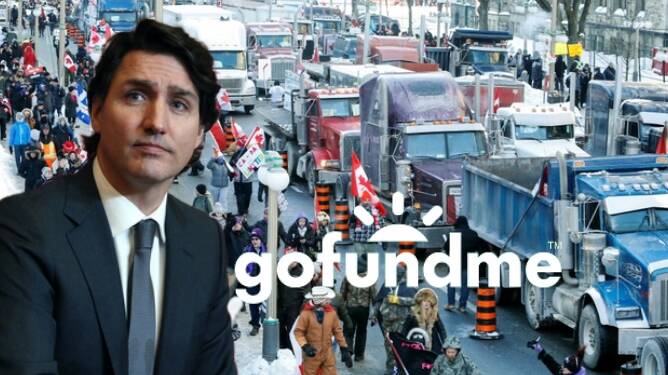 The Canadian government recently announced a vaccine mandate rule for truck drivers who transport goods between the US and Canada. In response to this, many Canadian truckers organized a protest march from Vancouver to the Canadian capital city of Ottawa, demanding the Trudeau administration to take back the rule.

GoFundMe, an American crowdfunding platform, announced this Friday that they have decided not to disburse any more money to the “Freedom Convoy” and to the supporters of the truckers protest rally gathered in the cities like Coutts, Alberta and Ottawa. The announcement came after some recent reports of the Trudeau administration and their allies forcing the crowdfunding platform to stop the funding of the protestors.

The Canadian government has been trying to end the protest by any means necessary, including seizing the money that was lawfully raised in a public setting for the truckers protest rally.

Ezra Levant, the editor in chief of the Rebel News reported in a tweet, “At the request of Trudeau, @GoFundMe has just stolen $9,000,000 from the truckers. Rather than automatically refunding it to the donors, they say they’re going to give it to groups of their own choosing. What a windfall for Black Lives Matter, Greenpeace and Planned Parenthood!”

In his tweet, he wrote that GoFundMe has decided to take – or some might say steal – the roughly CAD$9 million that was supposed to be used to pay for supplies like gas, food and other necessities for the truckers. He further said that the crowdfunding platform has decided to dole the truckers protest money out to charities of the company’s choosing unless donors fill out a refund request form. Questioning the intentions of the company, he asked, why has the company decided on this policy, instead of instating automatic refunds for donors?

Defending its decision of stopping the disbursement of funds meant for the truckers’ rally, the company said, “The fundraiser is in violation of Term-8 of the company’s terms of service clause”. The company also said that it often works with local authorities to make sure they have a detailed understanding of facts on the ground. According to the company, the decision was made in order to ensure GoFundMe remains a trusted crowdfunding platform.

The sudden decision of GoFundMe to stop and reroute the funds meant for the truckers’ rally raises a serious question on the intention of the company. It creates doubts that the company is looting people’s money and diverting it to a different route without their consent. Also, the fact that the Trudeau government knows this and is still allowing this is proof that they themselves are against the Canadian people’s freedom of speech and expression. Moreover, this signals a possibility that the Trudeau government is actually behind this action by the GoFundMe Company, and they are the ones who have stolen Canadian people’s CAD$9 million to forcefully end the truckers protest rally.