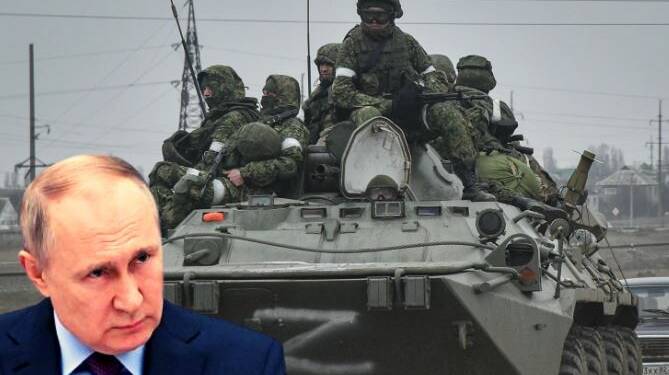 We are just four days into the fierce battle between the Russian and Ukrainian armed forces, and both sides are already claiming to have slaughtered thousands of their enemies. Kyiv says 5300 Russian soldiers have been killed, along with 191 tanks destroyed and 29 fighter jets shot down.

However, none of these numbers has been verified independently. Western media seems to blindly publish whatever strengthens their anti-Russia propaganda. While Russian news outlets face stiff pre-emptive censorship from the Big Tech and Western governments, information warfare disseminating from Ukraine is being taken at face value.

One perception that has widely been established by anti-Russian media is that the Russian forces are under heavy pressure in Ukraine, and President Vladimir Putin has “already lost his senses” due to the unexpected setback.

Russia “not even fighting” a war in Ukraine

But they conveniently hide the fact that Russia has not even deployed its lethal airforce on the ground. Russia has declined to use the vast majority of its fixed-wing combat aircraft amid increased fears of civilian causalities and a mind-boggling amount of propaganda by Ukraine. The Russian government has made it more than clear that killing Ukrainian civilians and military-men is not their objective; they only aspire to topple the West-backed government in Kyiv.

Openly calling for toppling a democratically-elected government indeed amounts to a violation of international rules and the UN charter, but these moves appear to be backed by NATO’s incessant attempts to expand its borders eastwards, towards Russia. So, Russia’s war in Ukraine is against NATO and the US, and not against the Ukrainian army and its people.

And that brings us to the conclusion that it serves no purpose for the Ukrainian Army to fight out the Russian troops. Before launching the invasion, Putin had asked Ukrainian troops to lay down their arms. Some analysts even believe that Putin may be eyeing to install a military regime in Ukraine to stave off NATO’s threat and ensure Russia’s neighbourhood remains peaceful.

Putin has a deal for the Ukrainian army

Putin on Friday had addressed the Ukrainian troops while telling them to “take power in their own hands” and agree a peace deal with Russia to stop the war. “It seems that it will be easier for us to come to an agreement than with this gang of drug addicts and neo-Nazis, who occupied Kyiv and took the entire Ukrainian people hostage,” Putin had said.

There is no dearth of pro-Russian elements in Ukraine. From businessmen to politicians, and from militias to media; public figures supporting Russia can be seen literally everywhere. Ukraine is not that anti-Russian country as the West seems to portray it. So, you are highly mistaken if you think that the 200,000-men strong Ukrainian military is battling with the Russian invading forces with its full might.

Strength of the Ukrainian military

Ukraine’s military forces total 215,000 active personnel, of which 125,000 make up the permanent army, and 220,000 reservists. Make no mistake, the figure rises to almost 900,000 taking into account veterans and volunteer defence forces. Paramilitary security forces – the border guards and the National Guard – potentially add another 113,000 trained personnel to Ukraine’s defensive capabilities. You see, Ukraine is a huge army compared to just above 150,000 troops deployed by Russia, the bulk of which is yet to enter Ukrainian territory.

Are Ukrainian soldiers refusing to take up arms against their Russian brothers?

Does Ukraine even have to ask for their help if it has close to a million trained defence personnel already sitting at home? Absolutely not; if the absence of Russian airforce on the ground and a very scattered deployment of the Russian army is considered.

Also, consider the news of Ukrainian soldiers being taken as Prisoners of War (PoWs) by their Russian counterparts on Snake Island. Previously, they were claimed to have been slaughtered by Russian forces, but now they have been proven alive.

It’s true that some of the Ukrainian soldiers, who are influenced by radical anti-Russian elements in the government, are battling with Russian forces fiercely like there is no tomorrow; but it is hardly believable that Ukraine’s been able to exploit its full military might in chasing the Russians out of their home. Perhaps the hatred for Russian forces in Zelensky’s heart is not shared by many of his troopers as is falsely believed by many in the West.