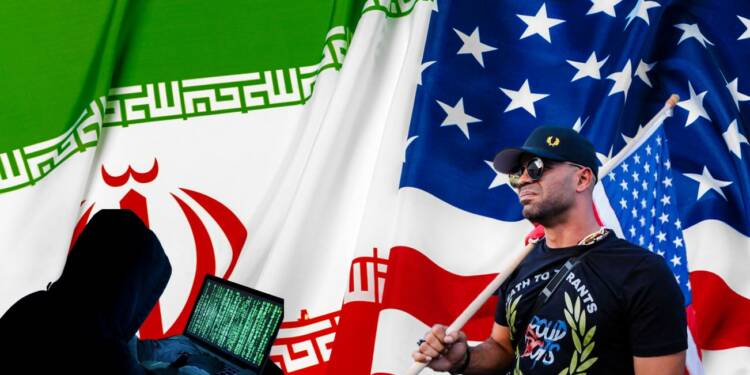 US President Joe Biden and left-leaning Democrats are facing yet another setback. This time over foreign collusion in American Presidential polls. Remember how Democrats have been constantly alleging coordination between Donald Trump’s 2016 election campaign and Russia.

Read more: Iran issues threat to assassinate President Trump but these are not Iran’s words

‘Proud Boys’ regularly make news for their illegal and violent activities. The group has been de-platformed by major tech platforms for its “racist” views.

However, in a big surprise, the FBI has released a briefing, according to which a group of Iranian hackers supposedly posed as ‘Proud Boys’ members as a part of a cyber misinformation campaign intended to interfere in the 2020 polls.

The Iranian hacker group, identified as Emennett Pasargad, was the one that interfered in the Presidential polls. Members of the group reportedly mask their activity by attacking through VPNs. Websites that use certain software programs like WordPress were particularly vulnerable to the Iranian hacker group as hackers can easily exploit such programs to carry out their attacks.

As per the FBI, Emennett Pasargad has conducted “traditional cyber exploitation activity” since 2018. It has targeted news, shipping, oil, finance and telecom companies not just in the US, but also in Europe and other parts of the world. In 2020, Emennet also conducted cyber disinformation campaigns against Saudi Arabia, by masquerading as the “Yemen Cyber Army”.

In 2020, the Iranian hackers carried out a “multi-faceted campaign to interfere in the US election”. And the Iranian interference was way too deep. The hackers obtained confidential voter information from at least one state election website and even threatened voters with intimidating e-mails. Also, it used tools like videos containing “disinformation” and unauthorised attempts at accessing voting-related websites of several states.

Why Iran may have interfered in the 2020 polls

Tehran had every reason to interfere and possibly dethrone Trump. After all, Iran hates Trump. The former US President is the one who got the top Iranian military official, Soleimani killed. Soleimani was one of the most powerful men in Iran, he was killed by the US under Trump’s watch and Tehran simply couldn’t do anything.

Read more: Are the US and Iran on a Course to War?

And Soleimani is just the tip of the iceberg. It was Trump who ruined Iran by dropping the Iran nuclear deal or what is officially called the Joint Comprehensive Plan of Action (JCPOA) and reintroduced tough sanctions against the Shi’ite nation. Also, right towards the end of his Presidential tenure, Trump brokered the Abraham Accords which has totally side-tracked Tehran in the region.

Trump had managed to isolate Iran both politically and economically. And this was a great victory for American diplomacy as the mainstream US allies were able to control the Middle East at the expense of Iran.

And as for Biden, things are much better with Iran. Biden’s former boss Barack Obama was the one who gifted the JCPOA to Iran and dropped sanctions against Tehran. Even before Biden’s election as the US President, it was well known that he would go soft on Iran and damage Washington’s relations with Saudi Arabia, the UAE and Israel. Iran had every reason to interfere and dethrone Trump.

Read more: Iran makes it clear that it doesn’t want the JCPOA, it just wants to use the deal as bargaining chip against the US

And if Iran did interfere with the intention of softening the US, it has actually succeeded. After all, the US doesn’t have the same warm relations with the Arabs and Israel, as it used to have during the Trump era. The US itself is going soft on Iran, by loosening sanctions and constantly appeasing Tehran in order to revive the JCPOA.

So, we are not surprised if Iran interfered in the 2020 polls, as it had every reason in the world to do so.