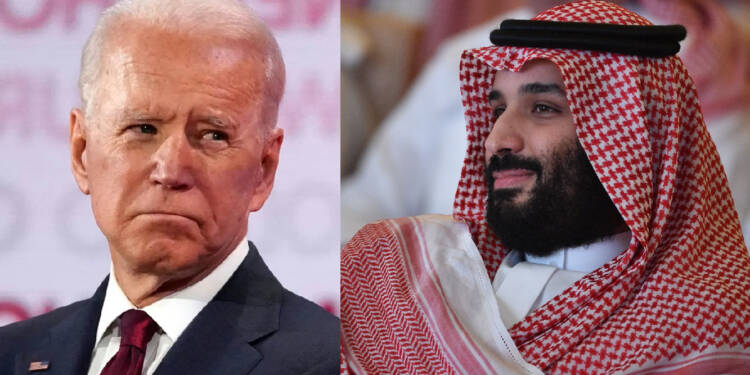 When Joe Biden assumed the US presidency in January this year, he had a clear agenda of ostracizing the powerful ruler of Saudi Arabia- Mohammed Bin Salman. Nine months down the line, Biden has meekly rolled back his anti-MBS pursuit as he realizes that MBS’ support is vital to keep the American interests afloat in the Middle Eastern region.

Indeed, it was a sobering moment given Biden’s reluctance in engaging the Kingdom’s de-facto ruler in previous months. After all, MBS was a persona non grata for Joe Biden from the campaign days who had vowed to bring justice to the victims of 9/11 attacks and release a classified U.S. intelligence report on the murder of Jamal Khashoggi.

“We are going to make them pay the price and make them, in fact, the pariah that they are,” Biden had said in an election campaign last year. Biden did try to walk the talk after he assumed the presidency and announced to release the confidential intelligence reports signaling MBS’ glaring role in Khashoggi’s murder.

Read More: The threat of a united Middle East and the fear of being expelled from the region altogether makes Biden pull back from his “Attack MBS” plan

When Biden got the first pushback from MBS

However, it was then when Joe Biden realized taking on MBS won’t be a cakewalk as he had thought beforehand. Joe Biden realized rupturing ties with MBS was lethal for US interests in the region. Hence, Biden chose to renege on his promise rather than punishing MBS that could result in blighting of ties between the US and the KSA.

Biden did try to undermine MBS by prioritizing King Salman for diplomatic exchanges. Biden stoked tensions in the region by throwing his weight behind the Iranian regime. But, if NSA Sullivan’s visit to Saudi Arabia is any indication, Joe Biden is in no mood to carry on his anti-MBS campaign. In fact, he wants to bury the hatchet with the Saudi leadership and wants to collaborate on issues like Yemen, Iraq and Lebanon. But, Biden is not doing this openly.

Biden administration’s attempts to downplay the recent meeting with MBS

Interestingly, the Biden administration is downplaying the recent diplomatic exchange with Saudi Arabia. The White House did not release any statement regarding the visit. However, Saudi Arabia unilaterally issued the statement mentioning that the US side is keen to bolster bilateral ties between Riyadh and Washington.

The press release read, “Sullivan stressed Washington’s complete commitment to supporting Saudi Arabia as it defends itself against threats, including a ballistic missile and armed drone attacks by the Houthis. He emphasized US President Joe Biden’s support for Saudi Arabia’s goal to push forward a lasting political solution and ending the conflict in Yemen.”

All in all, while the Biden administration is in a quite precarious position on the issue of embracing MBS after despising him initially, Saudi Arabia is showing no qualms in highlighting Joe Biden’s rapprochement.

Biden’s indifferent conduct towards Arabs and Israel, along with his pampering of Iran has rendered the US a nonentity in the region. Biden’s incessant assault on the Abraham Accord further weakened the USA’s credibility among its allies. Biden’s indifference prompted the Arab world to look beyond Washington and forge closer ties with Russia.

In August this year, Saudi Arabia and Russia signed an agreement to develop joint military cooperation between the two countries. In Moscow, Saudi Arabia’s Deputy Defense Minister Prince Khalid Bin Salman said, “We discussed our common endeavor to preserve stability and security in the region, and reviewed shared challenges facing our countries.” The Saudi defense minister had earlier met with his Russian counterpart, Sergey Shoygu to “explore ways to strengthen the military and defense cooperation” between the two countries.

On the other hand, Saudi Arabia launched peace talks with Iran that risked eradicating the USA’s interests in the region altogether. Saudis and Iranians have already had three rounds of peace talks in Iraq, and the bilateral relations are expected to witness a thaw in the times to come. As per the Iranian side, “serious progress” has already been made towards resolving pending issues. Any reconciliation effort between Saudi and Iran— the two fiercest rivals of the region—would essentially eradicate the scope of external interventions, and that’s what stoking tensions in the US lately.

Biden’s ill-thought campaign against MBS has been driven into the ground by Saudi Arabia’s shrewd diplomacy. Biden has realized that MBS’ vindictive wrath will bode disastrous results for his foreign policy in the Middle East. Hence, prostrating before MBS seems the only way forward for Joe Biden as of now. Biden is finally waking up from the slumber after nearly losing the Middle Eastern region in its entirety.

China’s shortage of professional talent becomes a headache for Jinping, as he admits to stealing tech knowledge