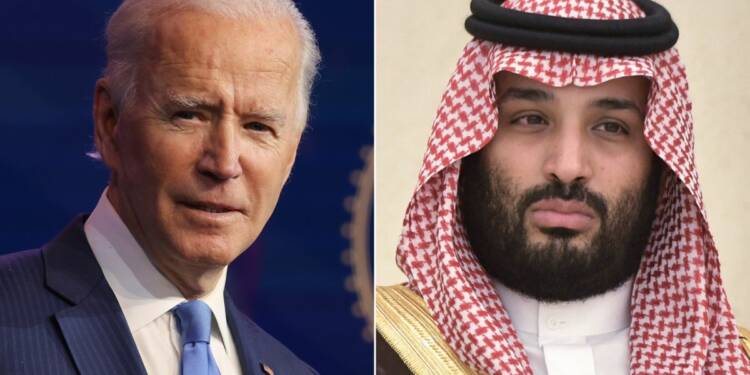 Days after declassifying the US intelligence report claiming that Saudi Arabia’s Crown Prince Mohammed bin Salman approved an operation to “capture or kill” Jamal Khashoggi and then promising big action, the Biden administration has backtracked on its intentions of punishing MBS. Biden earlier mentioned that a big decision would be taken on Monday and came up with the idea of sanctions on the people who have committed the crime.

However, the question remained that if the USA was sure about the situation and was implicating MBS then why are they not taking any actions against him? Everyone was waiting for Monday and assumed that the big action mentioned by Joe Biden would be directed at MBS. However, now Washington has made it clear that they will not take any action against MBS, citing the precedent of not sanctioning the leader of a country that is a strategic partner. The reality is way different from the reason provided by the US administration. Joe Biden has realised the diplomatic cost of penalizing MBS and is fearful of an outright expulsion of the USA from the Middle East.

“Historically and even in recent history, Democratic and Republican administrations, there have not been sanctions put in place for the leaders of foreign governments where we have diplomatic relations and even where we don’t have diplomatic relations,” White House press secretary Jen Psaki said during an interview on CNN’s State of the Union’ program. However, the reasoning is not adding up and nobody can deny the fact that Joe Biden had to retreat from his intent to punish MBS.

“A consensus developed inside the White House that the cost of that breach, in Saudi cooperation on counterterrorism and in confronting Iran, was simply too high.” officials told the New York Times. This seems to be a more plausible argument. The fact that other Middle Eastern allies of the USA who technically should have toed the line of arguments of Joe Biden have unexpectedly sided with MBS and Saudi Arabia, which resulted in alarms bells ringing in Washington. Instead of following the Biden administration’s attempted recalibration, some long-standing allies including the UAE and Israel are taking an independent stand.

Jerusalem is currently negotiating the formation of a four-nation defence alliance with the kingdoms of Saudi Arabia, Bahrain, and the United Arab Emirates. As these relations and alliances are getting stronger, the US hand is getting weaker in the Middle East.

Read more: A toothless measure with a huge cost: MBS won’t be penalized, and American Muslims will be enraged

Unlike Trump who was the person leading and uniting the Middle East, Joe Biden due to his pandering of Iran and fanning of the Palestinian issue has lost the confidence of the regional allies. Unlike Donald Trump, Joe Biden is out of the loop and the regional allies are signalling him that any attempts to make one of its allies geopolitically vulnerable or to unseat the leadership will lead to the USA losing all the grip and the leadership position in the region.

In addition to this, the Middle East and North Africa (MENA) allies are contemplating the reasoning behind supporting the USA if it cannot even contain Iran, which is the biggest threat to the US allies like the Saudis and Israel in the region. The fact that the Biden administration has not been considerate of its regional allies while dealing with Iran and it is becoming clearer that going ahead Iran will be more powerful and may even become nuclear-capable, it is apparent for these countries to work on their security infrastructure and they just cannot depend on the United States to be their white knight. This will be a major blow for the Biden administration and could lead to the USA losing major influence points in the Middle East.

In this scenario, Saudi Arabia becomes the linchpin for the success of a joint collaboration against Tehran. We already know how important Saudi Arabia was for the gulf countries to join the Abraham Accords, and more specifically how important was MBS’s farsightedness. Thus, any action against MBS would go against the interests of the USA’s Middle Eastern allies. And instead of choosing the USA, the Abraham Accord countries will unite among themselves resulting in the ouster of the US from the region.

Joe Biden has come to realise that the Arab countries are creating a front against him. He has understood that they are forming an independent policy which is visible with the talks for military alliances among themselves without looping in the USA. It will result in creating a front of Abraham Accord countries without the USA in it, and as they consolidate, the utility of the USA in the region will evaporate. It will totally destroy the USA’s influence and interest in the Middle East. Realising all this, Joe Biden has held his virtue-signalling horses and made him pull out from his “attack MBS” plan.