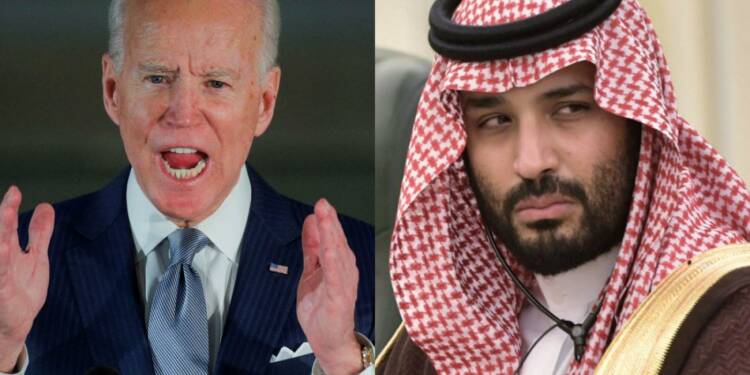 A US intelligence report released on Friday said Saudi Arabia’s de facto ruler, Crown Prince Mohammed bin Salman, approved an operation to capture or kill journalist Jamal Khashoggi in 2018. Biden administration has made a habit of complicating simple situations and throwing allies under the bus. They have once again proved this by implicating Saudi Crown Prince Mohammad Bin Salman Khashoggi’s killing, however, this time it is going to boomerang on them.

“We assess that Saudi Arabia’s Crown Prince Muhammad bin Salman approved an operation in Istanbul, Turkey to capture or kill Saudi journalist Jamal Khashoggi,” the US office of the director of National Intelligence said in the four-page report. This assessment was rejected by Saudi Arabia. Saudi Arabian Foreign Ministry tweeted, “The Government of The Kingdom of Saudi Arabia Completely Rejects the Assessment in the Report Submitted to US’ Congress Regarding Murder of Saudi Citizen Jamal Khashoggi.”

#STATEMENT | The Government of The Kingdom of Saudi Arabia Completely Rejects the Assessment in the Report Submitted to US’ Congress Regarding Murder of Saudi Citizen Jamal Khashoggi pic.twitter.com/VQwYpBjvvX

Firstly, ties with the Saudi Arabians will worsen to newer extremes, as the de facto ruler of Saudi Arabia Mohammad Bin Salman will also become the de jure ruler of the Kingdom of Saudi Arabia in the future. Although, Joe Biden tried to recalibrate ties with Riyadh by sidestepping MBS and having a phone call directly with King Salman. The Biden administration understands that MBS will one day become the King of Saudi Arabia, which seems why they have used such a toothless measure. However, this kind of virtue signalling will sour ties with MBS and complicate future handling of the Middle East issue for the US itself.

This report cannot even be called an action, however, this kind of virtue signalling will only worsen the US relations with Saudi Arabia and MBS. The US administration seems to have forgotten the difference between de facto and de jure power centres, and by publicly implicating MBS, the USA has made sure that the US-Saudi Arabia bilateral ties hit a rock bottom. This is a toothless measure that comes with a huge cost.

Initially, Joe Biden sidelining MBS may have been coupled with hopes for a coup against MBS within the house of Saud, however, given the hold on power MBS has in Saudi Arabia, it is practically impossible. So, taking such actions against the leader possibly destined to be the King in a nation that is a long-standing ally in the Middle East which is so heavily contested will only complicate the situation further and weaken the US hand in the region.

Secondly, the Saudi Arabian hand in the Middle East is getting stronger, with the Abraham Accord countries coming even closer. Jerusalem is currently negotiating the formation of a four-nation defence alliance with the kingdoms of Saudi Arabia, Bahrain, and the United Arab Emirates. As these relations and alliance solidify, the US hand will become weaker in the Middle East. In such a situation these actions against MBS will end up being counter-intuitive.

Thirdly, these actions against a powerful leader of Saudi Arabia will not go down well among the Arab Sunni American population and its divisive for the Muslim world. Sunni Muslims have traditionally looked up to the Saudi leadership. The Arab Muslim votes, historically have been for long tilted in favour of the Democrats. Donald Trump has galvanised support among Arab American Republicans and brought home some of those who, during the first two decades of this century, had stopped self-identifying with the GOP. Many Arab Muslims still voted for Democrats as they have done historically, Biden’s margins are largest are among younger Arab American voters (67% to 27%) and senior citizens (66% to 26%).

But these virtue-signalling and implication of MBS will make sure that the Arab Sunni population in the USA will end up siding with the Republicans permanently. These activities by the Biden administration will not only impact US foreign policy adversely but also impact the political prospects of Democrats domestically.

These toothless measures will have no impact on Saudi Arabia and MBS, but will surely incur huge losses for the Biden administration and the USA both internationally and domestically.