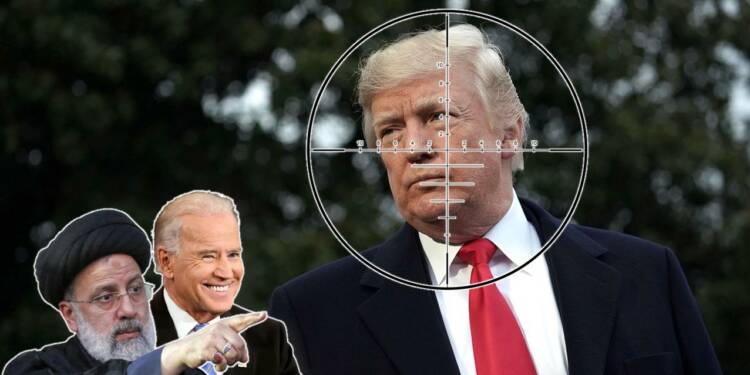 The US President is considered to be the most powerful man on the planet. We know the perception has changed drastically with Joe Biden. But till Trump’s stint as the US President, the top American executive exercised a lot of powers. And when you are too powerful, you make enemies and when you make too many enemies, you face security threats.

Abraham Lincoln, James A. Garfield, William McKinley, and John F. Kennedy are four US Presidents to be assassinated. And many US Presidents like Ronald Reagan, George H.W. Bush, Bill Clinton, George W. Bush, and Barack Obama faced assassination plots. Donald Trump, the previous US President has two main enemies- Iran and the far-left radicals. In fact, Iran is issuing threats to assassinate Trump and his aides. But the issue of Iranian threats goes far beyond Tehran.

Before anything else, you need to know that Trump is hated passionately by Iran. He is the one who got Soleimani, the commander of Islamic Revolutionary Guard Corps (IRGC)’s elite Quds Force, killed.

Read more: Are the US and Iran on a Course to War?

Soleimani was an extremely important man in Iran and was considered the second most powerful leader in the country, next only to the Iranian Supreme Leader Ayatollah Ali Khamenei. The Iranian government has been literally baying for Trump’s blood ever since, but it couldn’t do anything to avenge Soleimani’s death because the US military and Trump were too tough for Iran to take on.

Read more: After Iran, the trigger-happy USA has a solid case to strike Pakistan but it plans to do the opposite

Iran issues threats against Trump and his allies

When Trump was in power, Iranian hardliners had to compromise with their pride and stay silent in face of Trump’s onslaught. Not only did Trump eliminate a top Iranian military official, but he also scrapped the Iran nuclear deal and re-imposed sanctions on Tehran. Trump managed to defeat Iran comprehensively at political, military, and diplomatic levels.

So, with Trump out of power, Iran has been doing some really nasty propaganda. Recently, the official website of Iran’s Supreme Leader Ayatollah Ali Khamenei posted an animation depicting Trump’s assassination. The video is titled “Revenge is Inevitable” and depicts Iran taking “revenge against the murderers and those who ordered the martyrdom of [Islamic Revolutionary Guard Corps Quds Force commander Qassem] Soleimani.”

And guess what, the video was created as part of a contest commemorating the January 3, 2020, killing of Soleimani.

The tasteless video even shows “Trump’s House” where the former US President is shown playing golf. Ultimately, a four-wheeled drone infiltrates his house, and an Iranian military hacker is shown to be deactivating security cameras.

Another video was published on Iranian President Ebrahim Raisi’s website. Titled “Hard Revenge is certain” which features video cuts of speeches featuring Trump and Raisi, and photos of the slain Iranian military commander- Soleimani. The video ends with a card reading “#Hero”.

Now, if the Iranian desire for ‘revenge’ was restricted to animations and propaganda videos, it may not have been a cause of concern. However, a US State Department assessment is said to have stated that the Trump administration’s Iran envoy Brian Hook is facing “serious and credible” threats to his safety. Washington Free Beacon claims to have gone through the non-public assessment produced by the State Department.

The assessment determined that a “specific threat persists with respect to former special representative [for Iran] Brian Hook.” The envoy was instrumental in Soleimani’s killing and therefore Tehran seems to be targeting him. The State Department assessment however described the threats as a “foreign power or the agent of a foreign power.”

How the threat to Trump goes beyond Iran

Iran can think of only one thing- revenge. But Trump’s security is a complicated matter and is not restricted to Iran.

Trump is no longer in power, and he may also have a private security apparatus of his own, but all former US Presidents are entitled to a lifetime of Secret Service protection. They are public figures, and their protection remains a State concern. The government of the day has its skin in the game as far as the protection of former Presidents including Trump is concerned.

Trump himself faces many haters, apart from Iran. The far-left that finds support from a section of Democrats and the Biden administration nearly matches Tehran in hating Trump. During the Black Lives Matter protests and subsequent rioting in 2020, the White House itself was insulted, forcing the President of the US to rush into a bunker for about an hour and the historic St. John’s Church near the White House too got damaged.

Such was the atmosphere of hate against Trump that the left-controlled media had mocked Trump for rushing into a bunker.

So, Iran isn’t the only power that doesn’t want to see Trump coming back to power for a second term.

From an Iranian perspective, the public death threats against Trump and his aides like Brian Hook show Tehran has been emboldened. After Biden came to power, he made it a point to revive Obama’s JCPOA legacy. This is why he has been loosening sanctions against Tehran and failing to punish Iran for its rogue actions.

Read more: Biden begins removing sanctions from Iran thereby bringing the region at the brink of a war