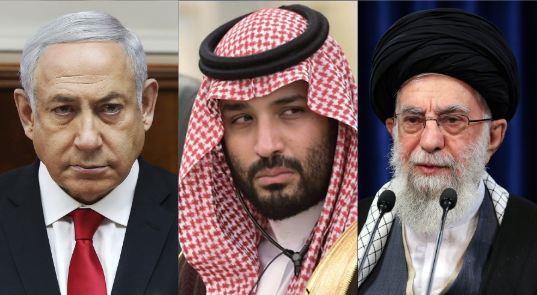 The Biden administration and European nations are moving towards getting back into a possible Iran Nuclear Deal. However, the Arab nations and Israel are making it crystal clear through their actions that they will keep up their offensive against Iran with no heed to the USA’s policies.

Iran has been continuously targeting Israel and Saudi Arabia either directly or indirectly through its proxies in Iraq and Yemen. The intensity of these incidents has increased since Joe Biden has taken over as the President of the United States. Iran finds itself in a geostrategic sweet spot, where it perceives that it can take actions against other sovereign nations with impunity, confident that Joe Biden will look the other way. However, Israel and the Arabs have had enough of these actions and are no longer willing to wait and toe the line of the Biden administration.

Israel and Arabs have taken a slew of actions that solidify the idea that the Abraham Accord countries and Saudi Arabia are directing their foreign policies independently of the USA. The most obvious signal was Foreign ministers of the Arab League reaffirming the UAE’s sovereignty over three islands that were occupied by Iran in the 1970s. In a resolution adopted during their meeting in Cairo, the top envoys denounced the Iranian government’s continued occupation of Abu Mousa, Lesser Tunb and Greater Tunb and described it as a violation of the UAE’s sovereignty in a way that destabilises the region and threatens international peace and security, state news agency WAM reported.

In addition to this, Israel too has hardened its stance vis a vis Iran and its proxies. Israeli Defense Minister Benny Gantz on Thursday said that the Israel Defense Forces are continuously updating their plans for a prospective military strike on Iranian nuclear sites. Gantz, in an interview with Fox News, said the military plans would not be finalised until right before such a strike was set to be carried out. “If the world stops them [Iran] before, it’s much better. But if not, we must stand independently and we must defend ourselves by ourselves,” added the defence minister.

Read more: High on support by Biden, Iran is poking both Saudi Arabia and Israel at the same time but a terrible fate awaits it

Tehran is trying to show Israel and Saudi Arabia that their time is over and now it will exact revenge on them for the actions during the time of Donald Trump. However, it was a futile assessment as the Abraham Accord countries are in talks of a military pact among themselves. Now they are simultaneously taking actions and showing the US administration that they will not support Washington as they go ahead with JCPOA. The Arab-Israel camaraderie is only going to increase, and as this happens, Joe Biden will find himself alone in the Middle East with Iran on the discussion table.