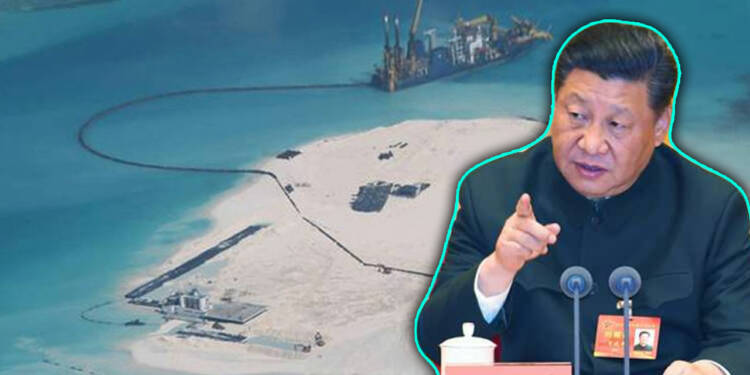 China’s most expensive and ambitious programme to claim maritime territory in the South China Sea is sinking, quite literally. Since 2013, China has been dredging and destroying ecologically fragile reefs in the disputed waterways of the South China Sea in order to build man-made islands. Beijing has successfully built seven major military bases on such artificial structures complete with ports, airstrips, radars and missile installations.

These artificial islands that were built at a huge cost served as unsinkable carriers for China. More importantly, the right to harness resources is essentially tied with the coastline in international law. According to the United Nations Convention on the Law of the Sea or UNCLOS, area within 200 nautical miles from the baseline of a country’s coastline is its exclusive economic zone, where it has exclusive economic rights. China’s plan was to game international law by building artificial islands, but these expensive, man-made Chinese islands are now getting submerged in the disputed South China Sea waters.

The most important ring of artificial Chinese installations was located on the Fiery Cross, Subi and Mischief reefs in the disputed Spratly Islands. These artificial Chinese islands had quite a destabilising impact upon the South China Sea as the Spratly Islands are a disputed archipelago claimed by five other countries apart from China including Vietnam, The Philippines, Malaysia, Brunei and Taiwan.

The artificial Islands themselves came at a huge environmental cost. The reefs were pulverised by China to create raw materials for its man-made bases. Beijing claims that it is restoring the reefs, but National Interest quoted marine biologist John McManus at the University of Miami as saying that dredging “kills basically everything” living around the coral reefs.

For China, the environmental cost was insignificant for the artificial islands that are often used for stationing military assets gave the paper Dragon a vantage point in case of any future conflict with the United States in the hotly-contested South China Sea region. The man-made installations are also supposed to help China in its oil and gas exploration ventures. And then there is always that opportunity of using the artificial Islands for claiming greater room in the disputed waters by gaming the UN Convention on the Law of the Sea (UNCLOS).

But the environment has come back to bite China. The Economist reported, “Rumors suggest the new islands’ concrete is crumbling and their foundations turning to sponge in a hostile climate. And that is before considering what a direct hit from a super-typhoon might do.”

A possible reason behind the Chinese Air Force’s reluctance to deploy fighter aircraft on these artificial islands is the poor structural integrity of the military facilities built on these man-made installations, including the suboptimal airstrips.

Even if Beijing was trying to game international law by building these artificial islands, then China’s claims are only as good as the crumbling concrete that forms the weak foundations of China’s man-made installations.