Morocco, Greece and now Italy – India has entered the Mediterranean to protect its European trade routes 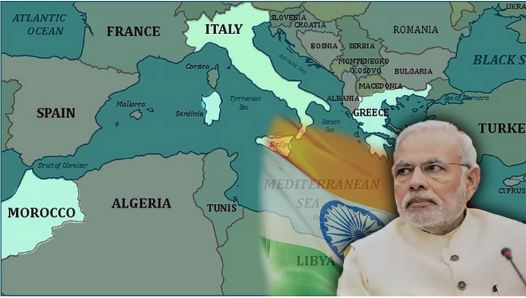 India has always been a firm supporter of the countries globally which faced exploitation at the hands of colonizers as it was a shared experience. The memories of slavery and indentured labour are still afresh in the memories of those who were once colonized. There is a sense of mutual sympathy and respect which a country that flashes its wallet disrespectfully all the time can never understand. India is now proactively attempting to enhance the relations with which it shares values that were left unattended during the previous governments. One such is with Morocco.

India and Morocco have agreed on signing an MoU for cooperation in the field of defence to expand the bilateral relations. In a virtual meeting conducted between Foreign Minister S Jaishankar and his counterpart in Rabat, Nasser Bourita reassured firm support to each other in a variety of sectors that includes Information Technology, cybersecurity, education, culture, agriculture, and counter-terrorism. Both sides agreed that the relations had escalated multi-fold after the Visit of Moroccan King Mohammed VI for the third India-Africa Forum summit in 2015. The signing of a defence deal holds extreme importance, especially for India.

Morocco sits at the juncture of the Mediterranean Sea and the Atlantic Ocean, the access that it provides to America and Europe is unmatched. Also, Morocco possesses the largest reserves of phosphates in the world which are dearly needed for the production of fertilizers. Though Morocco is a monarchy, its politics are democratic all thanks to the wise wisdom of King Mohammed who established a new constitution that gave most of the powers to parliament. The democratic government has fought exceptionally well against the radical elements locally and worked with responsible powers of the world against international terrorism.

Just like India, Morocco also faces the issue of separatism fueled entirely by another country. The area of Moroccan Sahara faces religious extremist separatist movements supported by Algeria. The issue is very similar to the Kashmir issue where a foreign country like Pakistan is engaged in creating disturbances through the means of religious extremism inside the territories of India. India is also considering opening up a consulate in Moroccan Sahara which will be seen as moral support to Moroccan sovereignty in the region.

The situation in the Mediterranean has been tense lately. The rogue activities of Turkey under the leadership of Erdogan has made everyone in the world believe that Turkey is all set to join the ranks of Pakistan, a not so sovereign state which uses its mandated machinery not for the development of its people but for inciting radical violence and causing harm to other countries, especially neighbours. For Pakistan, it is India and for Turkey, it is Greece.

Turkey has been bullying Greece in the Mediterranean Sea over an alleged dispute over energy exploration rights and maritime boundaries, which rightfully belong to Greece. Turkey has gone on to defy the NATO conventions, in which Greece is also a member and has planned to install a Russian-made air defence system, the S-400, on its frontiers. With Turkey inching towards disturbing the balance, it is supported by its ideological brother- Pakistan, a geopolitically isolated country that relies on China for its survival and in return practically acts like its colony.

For Greece, to challenge this bonhomie, India becomes an ideal choice. With New Delhi’s increasing military, economic and diplomatic clout, a close relation with India will go a long way for Greece that faces the biggest security threat since its independence from the Ottoman Empire.

India and Greece held a virtual briefing about the current issues hampering the peace in the Eastern Mediterranean Sea last month. Both sides were represented by the respective foreign ministers and discussed a range of multilateral and regional issues. Ankara has also been bothering India and making unnecessary and hollow statements to please its newfound junior partner Pakistan. Hence, further development of security structure between the two countries becomes the need of the hour. Security strategists have suggested that strong military cooperation between India and Greece will be essential for countering the evil axis of Turkey and Pakistan. Some Greek experts also desired the holding of a joint naval exercise with India in the eastern Mediterranean Sea and strategically important Aegean Sea.

On November 7, Prime Minister Narendra Modi and his Italian counterpart Giuseppe Conte sat down in a virtual summit and discussed topics ranging from bilateral ties, global issues, ways to counter effects of Coronavirus, and counter-terrorism. Both leaders condemned terrorism in all forms and the people or parties responsible for perpetrating it. The two leaders pledged to strengthen the cooperation in fighting menace at all levels.

The two countries further agreed to co-develop and produce military systems, strengthening defence cooperation. In the field of economics, the two countries signed 15 MoUs in sectors like energy, fisheries, shipbuilding, fashion and textiles, automotive components, and infrastructure. The two countries are going to head the next two G20 summits and they pledged to support each others’ common priorities for the vision of a development-oriented global agenda.

The two leaders agreed on the diversification of existing supply chains which were deeply exposed due to the coronavirus pandemic. Italy intends to shift its investments in the post corona world to reduce its dependence on one unreliable party that is China. During the spread of the pandemic, it was seen worldwide how China aggressively controlled world supply chains.

Just like India, Australia and Japan are working hard on expanding their supply chains, it is clear that more countries are opting to join this initiative. Both sides also reiterated the importance of a free, open, and transparent Indo-Pacific as a ‘fundamental area’ that connects Europe and Asia. The two counties professed for the establishment of a system in Indo-Pacific, which is based on the rule of law, inclusiveness, mutual respect, and free of hegemons and bullies.

In all three situations, one thing is common, India has arrived and is there to stay. The world is finally giving attention to what India said all these years regarding the importance to address the real security and economic threats. The Mediterranean is the area where the path to Europe, Africa, Western Asia, and even the Americas opens. The geopolitics revolves at the fingertips of powerful players, to become one, it requires political will, economic strength and military might. Currently, India is exhibiting the rare quality of ticking all the boxes. Summarizing, iron is red hot and India is all set to make the final blow.

Why is China not celebrating Biden’s victory? It is the fear of Trump