South Korea’s warnings are clear: Biden’s North Korea policy can easily turn into a disaster if Trump’s legacy is not followed 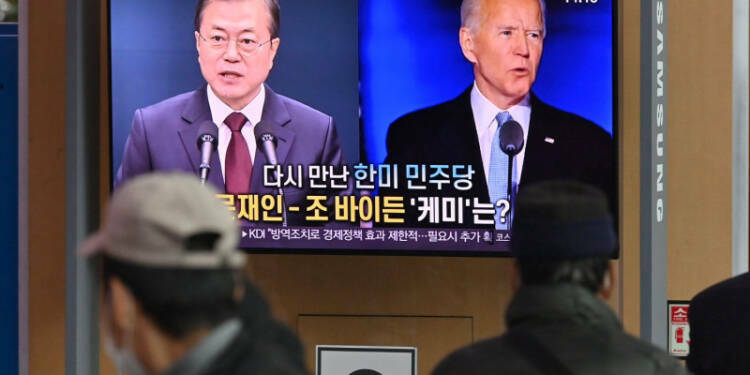 Biden has not yet entered office and the world is already forcing him to accept Trump’s foreign policy legacy. The latest message to Biden is coming from US ally South Korea. Even as Biden secured an apparent win in the US Presidential polls, South Korean President Moon Jae-in has said that South Korea will seek to advance Donald Trump’s legacy regarding the denuclearisation of North Korea.

Donald Trump is the first sitting US President to have met a North Korean leader. Biden, on the other hand, declared during his campaign trail that he would not meet Kim Jong-un without preconditions and even accused Trump of emboldening the North Korean leader. Biden therefore would have wanted to derail Trump’s Korea initiative. However, it seems that Seoul will not let Biden get rid of Trump’s Korea legacy.

South Korea is seemingly worried about Joe Biden stalling all the progress that Trump has made when it comes to North Korea’s denuclearisation. In his final Presidential debate, Biden had even denounced Trump for befriending Kim. Speaking about the North Korean leader, Biden had said, “He’s talked about his good buddy, who’s a thug.” The Democrat had added, “That’s like saying we had a good relationship with Hitler before he invaded Europe.”

It is in this context that the Moon administration in South Korea is asking Biden not to make a significant departure from Trump’s North Korea policy.

At a meeting with his top aides, the South Korean President even said that Seoul would ensure that there is no “vacuum” in diplomatic efforts to “strengthen the South Korea-US alliance and progress in the Korea peace process”.

Moon added, “I will do my utmost to make sure the precious achievements made together under the Trump administration be well succeeded and further developed by the next government.”

South Korea’s Foreign Minister Kang Kyung-wha went a step further and said, “Judging from what several people in Biden’s campaign say publicly, I don’t think they mean (a new government under Biden) would return to the strategic patience of the past.” “Strategic patience” strategy is a reference to the Obama administration’s policy of not engaging North Korea unless Pyongyang took concrete steps towards denuclearisation.

Now, South Korea is giving a very clear message to Biden- Obama’s “strategic patience” was a failure, while Trump’s engagement with North Korea was working. Regardless of his biases, Biden must persist with Trump’s legacy of engaging North Korean leader Kim Jong-un.

Trump himself had not become the best of Kim Jong-un’s buddies. He did trade insults with the North Korean leader, but the US President also scripted history by sending multiple letters and meeting Kim Jong-un three times. Biden and democrats might have dismissed Trump’s meetings with Kim as  “photo ops”, but at least South Korea, the biggest stakeholder in the denuclearisation of North Korea, seems to think that Trump’s Korea policy was working.

The fact that Seoul itself is asking Biden to continue from where Trump is going to leave the Korean peace process is something that will force Biden when it comes to his Korea policy. South Korea, a US ally, is the biggest stakeholder in North Korea’s denuclearisation process.

No American President can afford to ignore what South Korea has to say about the White House’s North Korea policy. So, if Moon wants Biden to follow Trump’s legacy, the US President-elect cannot ignore it for purely political reasons.

Due to Trump’s unique North Korea policy, we have witnessed cracks in the relationship between Pyongyang and Beijing for the first time. Seoul is overwhelmed by the effects of Trump’s Korea strategy, and now it simply doesn’t want Biden to ruin what Trump has so assiduously managed to achieve.

‘You’ll need us,’ Japan sends a clear message to Joe Biden, will not stop its aggressive posturing