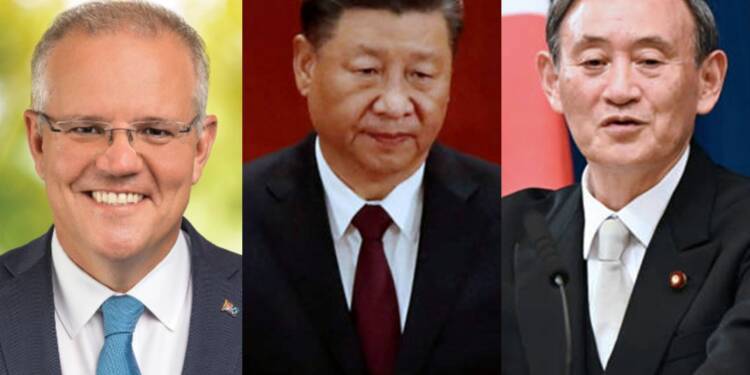 China can quite literally see the Indo-Pacific region slipping out of its hands, as the QUAD comprising India, the US, Japan and Australia becomes more and more comprehensive in terms of bilateral military alliances within the informal strategic forum. And now the paper Dragon is desperately and hopelessly looking for new allies in order to rein in QUAD’s growing influence.

QUAD is now fully connected in terms of military pacts. As per The Times, Australia is looking to sign a defence pact with Japan which will check China’s growing military power and assertiveness. The pact will pave way for the deployment of troops of the two signatories in each other’s territory. The pact is “aimed at sending a strong message” to China and from a Global Times report, it seems that Beijing is actually getting quite nervous.

The Chinese Communist Party’s propaganda outlet Global Times has reported, “China must prepare for US new QUAD schemes.” The report is a complete meltdown on China’s part and goes on to admit that whether QUAD will become formal or not is not relevant. What is relevant is that “it shows the US’ devotion to building a multilateral military mechanism.”

China has clearly taken the loud and clear message coming from increasing engagement within the QUAD. Global Times has reported, “The QUAD is actually a move to turn bilateral military alliances between the US and other countries into a quadrilateral one.” It added, “The US is now making the QUAD into an Asia-Pacific multilateral alliance.”

What should be bothering Beijing is the fact that the United States already has military pacts with both its traditional allies- Japan and Australia. Last month, India and the US also decided to sign a defence agreement on sharing sensitive satellite data amidst the ongoing Sino-India military standoff. Earlier this year, New Delhi also signed military logistics sharing pacts with Canberra and Tokyo. And now, Australia and Japan are also enhancing their bilateral military ties.

It is not lost on China that all these pacts are being signed with a view to check growing Chinese influence.

The QUAD is becoming a huge giant in its own right, and with its inter-locking, it has come to command a lot of respect within the Indo-Pacific region. So, the Association of Southeast Asian Nations (ASEAN) which is located right in the middle of the Indo-Pacific is also getting emboldened with QUAD’s meteoric rise and its enhanced ability to woo countries like Vietnam and the Philippines.

The QUAD’s outreach to Southeast Asia has led to players like Hanoi and Manila making anti-China remarks and even showing the intent to confront Beijing over its belligerent activities in the South China Sea.

Similarly, in the South Asia region, Japan and the US have shown the intent to join hands with India and woo countries like Bangladesh, Myanmar, Sri Lanka and the Maldives far away from a predatory China.

So, Global Times has suggested that China should “attach more importance to countries such as South Korea, New Zealand, and ASEAN members, so as to prevent the US’ attempt  from forging new military alliances.” In fact, for the past several months, Beijing has been making desperate attempts, including COVID-19 vaccine diplomacy offers, to somehow entice Southeast Asian nations even as the QUAD warms up to ASEAN. It is a different matter that Beijing hasn’t succeeded in its desperate attempts to woo ASEAN members.

China understands that every single Indo-Pacific power, including South Korea, New Zealand and ASEAN members, is a potential candidate to become a part of an expanded QUAD. As QUAD shows signs of turning into a full-fledged military alliance, China fears that QUAD will ultimately emerge as an Indo-Pacific version of NATO, further isolating Beijing.

Therefore, there is a visible urge within Beijing’s strategic circles to look for more allies, but it seems that China simply cannot match what the QUAD has to offer.