Henry Kissinger, the old fool, is back and he is making his love for China very obvious again 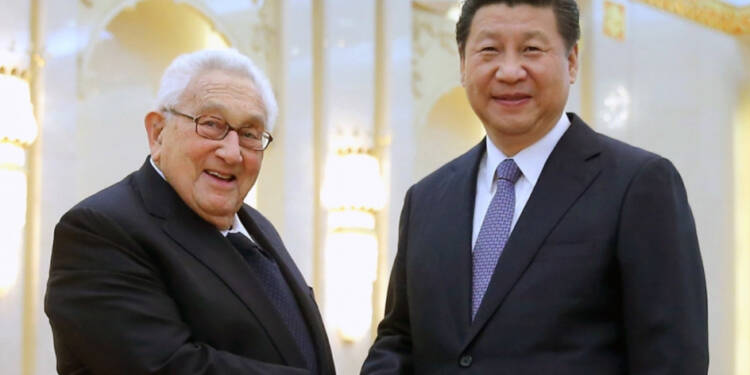 Old habits and first love don’t die, especially when you’re Henry Kissinger. At a time, when the world seems to be pointing China out for its mistakes, Kissinger is urging the US to kiss and make-up. After all, he cannot see his life’s work go down the drain, just because China is breathing fire.

One of the most influential American policy thinkers and Former Secretary of State has said that the Biden administration should move quickly to restore lines of communication between the two states. Kissinger, who paved the way for Nixon’s rapprochement with China in 1972, is now pushing the next administration towards China.

He stated: “Unless there is some basis for some cooperative action, the world will slide into a catastrophe comparable to World War I,”

Besides, his love for China is peculiarly suspicious because it comes at a time when China has eroded all structures of democracy in Hong Kong, it’s wolf wallet diplomacy keeps chipping away at the sovereignty of other states and the BRI has become a major issue to the US economic and security interests worldwide.

Kissinger’s statements to allow more placid relations with the red state is almost equal to giving up on US interests worldwide. His comments to involve Xi Jinping to create an institutional system to avoid conflict is a remnant of a cold-war like situation. But Kissinger has failed to realize China is not the Soviet Union.

Kissinger’s blind eye to China’s human rights violations shows the deep love he shares with China’s rise. In regards to the blatant Human rights violations on the Chinese territory, he said: “Of course, there are differences on the issue of human rights, It is important for each side to understand the sensitivities of the other, and not necessarily to solve the problem, but to alleviate it to a point where further progress is possible.”

Besides, not just turning a blind eye to the Human Rights Violations he goes on record to mention China, a fellow democracy. Mao must be turning in his grave. Kissinger said: “I think democracies should cooperate wherever their convictions allow it or dictate it.” It’s not surprising that he considers China a democracy, as he has previously stated: “I don’t consider China a communist state, no. I know that sounds paradoxical, but it’s my view.”

Nixon, The President, Kissinger served under, had warned long ago that China will be Asia’s most immediate threat, Kissinger chose to ignore it then and still chooses to ignore the threat that China can pose and the immediate threat that it still poses. Unlike Kissinger who for five decades have shown empathy to Chinese leaders and Nixon was not hesitant about identifying the source of the global peril: a communist regime that “nurtures its fantasies, cherishes its hates and threatens its neighbours.”

Moreover, his love for China is equal to the hate he has spewed in America’s policy in the ’70s against India. While he was the key figure to lead the United States towards Pakistan, he also accredited us with slurs such as that of “bastards”, called the then Indian Prime minister Indira Gandhi a bitch. Besides, he called the Indians to be the most aggressive goddamn people around.

And his rhetoric to side with China, engage with it, is in line with his view of the Indians and all the others who are not Chinese. China has threatened, is threatening sanctions, invasions, and trade wars to every major US ally in India, Taiwan, Australia, and Japan. Moreover, it has manipulated major International organizations such as the WHO and the WTO and has been openly pushing its expansionist world view in the South China sea.

Kissinger has failed to recognize China as a threat. He saw China as a means to achieve détente in the cold war and now he sees it as an equal to the United States. He has failed as a ‘US’ policymaker to put interests first. His recognition of China as a direct competitor means that he is willing to give up on US allies and interests for favours with Beijing. Therefore, him urging Joe Biden to improve relations as soon as possible, either hints that Kissinger is still stuck in the cold war and is pushing for a Chinese rapprochement or he has failed as a US policymaker to secure the US’s position as a leader of the free world.

Biden’s soft spot for China is so open that it should be a public record, and Kissinger came running to urge Biden to move forward with cordial relations with China. The only place Kissinger needs to be running is to the doctors because he is a senile old man with a chronic case of Sinophilia.