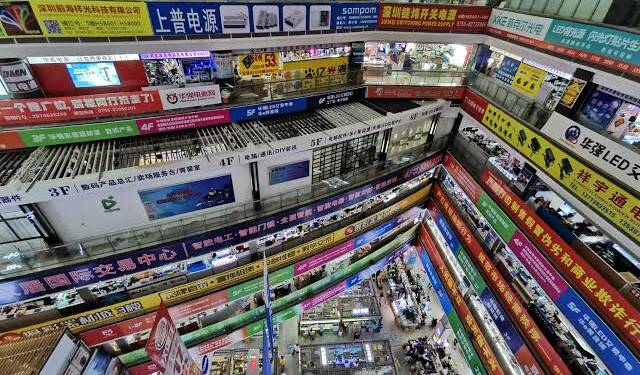 The coronavirus pandemic and the long-drawn trade wars with the USA has once again gulped another part of Shenzhen—China’s very own Silicon Valley. According to a Reuters report, the once-bustling Mingtong Digital City market in Shenzhen’s Huaqiangbei area–often termed as the world’s biggest electronic market is now metamorphosing into a cosmetic market.

The shops that once sold knockoff of Samsung and Apple iPhones are now selling second-hand copies of Mac lipsticks, Bioderma cleansers, and other foreign beauty brand products.“We used to just sell phone parts, but by 2016 some of the markets were 50% vacant, so we needed to try something else to survive, ”said one of the shop owners who further added, “We saw there’s great demand for beauty products, whether it’s in teenagers, women, or men in their 60s and 70s.”

The South-eastern Chinese city which once grew at a breakneck speed that came to be known as ‘Shenzhen speed’ is now staring at a bleak future. The emergence of the e-commerce platforms and the slowing growth rate of crown jewels of Shenzenviz, ZTE, Huawei, and Tencent have contributed immensely to the electronics shops shutting down and looking for new avenues.

Although Chinese consumers have a growing appetite for cosmetics, with sales worth 256.9 billion yuan ($39.26 billion) estimated from January to October, up an annual 5.9 per cent but the same period, overall retail sales have dropped by 5.9 per cent — suggesting, even the Cosmetic market is not a foolproof form of investment for the small-time shop owners.

The downfall of the Huaqiangbei market doesn’t come as a surprise if you look at the recent trends and the footprint of the electronic market of the country — especially Shenzhen.

Reported by TFI, after the supply in the chain of components and parts originating from the US dried up, Shenzhen’s manufacturing and innovation division nose-dived with Huawei being the biggest casualty. The tech giant is already reeling under severe pressure by the sanctions that the Donald Trump administration has imposed on it and the subsequent boycott by several European countries.

The fear of losing out on its biggest tech city (electronic market) is palpable within the Politburo of Beijing as President XI Jinping had delivered a 50-minutes long keynote speech on the occasion of the 40th anniversary of the establishment of the Shenzhen Special Economic Zone, in mid-October to infuse positive sentiments within the investors of the Silicon city.

Despite Xi Jinping’s desperate speech to woo the investors, his on-ground action seems to have generated a diametrically opposite reaction. The Chinese President is currently at loggerheads with the Internet giants of the country including Alibaba founder Jack Ma. It was Jinping who had halted Ma’s Ant Group Co.’s $35 billion IPO in Shanghai and Hong Kong after the latter made some scathing yet spot-on remarks about the rusty regulators of the country.

The egotistical attitude of Jinping to come with a stick behind one of its technological pioneers has not gone down well with the industry. Within China, there is a growing and the rising fear that the Xi Jinping administration could go after the biggest of tech companies. Huaqiangbei might just be the tip of the iceberg and if Donald Trump overcomes the judicial process and becomes President of the USA for another term, the Silicon Valley of China might be in for some bleak days ahead.