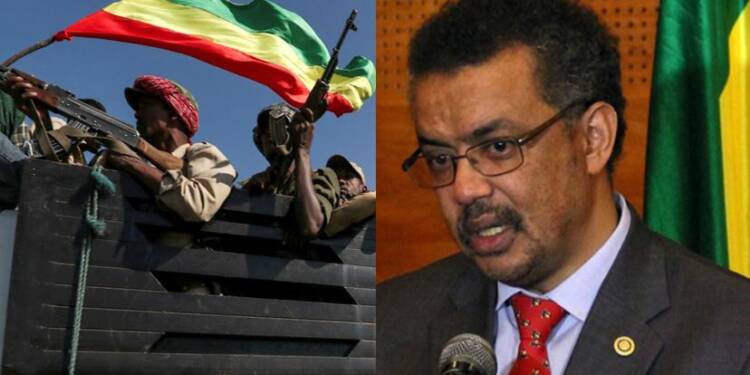 World Health Organisation (WHO) chief Dr Tedros Adhanom Ghebreyesus has been shrouded in controversies, as he has been the official broker for the Chinese Communist Party’s agenda and misinformation campaign. He has single-handedly compromised the stature and credibility of the WHO. Now he is again in the news, as the Ethiopian army on Thursday accused him of supporting dissidents in the Tigray region in their separatist efforts. The Ethiopian army is currently engaged in an armed conflict with the country’s Tigray region.

The WHO chief has become the tool for Chinese shinanigans. And if that was not enough, he is now being criticised for acting in support of the separatist elements within his home country of Ethiopia. After the government of the country, now the army chief has also called Dr Tedros a criminal and asked him to step down from his position in WHO.

In a televised interview on Wednesday, the army chief said, “he has worked in neighboring countries to condemn the war. He has worked for them to get weapons.” In response to these claims and accusations, Tedros said, “There have been reports suggesting I am taking sides in this situation, this is not true, and I want to say that I am on only one side, and that is the side of peace.”

The claims from the Ethiopian ruling dispensation’s accusations are open-ended without any substantial proofs but it is also true that WHO chief Dr. Tedros is a high-ranking member of the Tigray People’s Liberation Front (TPLF), the political party that rules Tigray which is now in open conflict with Ethiopia’s central government.

As part of the party, he was the Health Minister and Foreign Minister from 2005 to 2016, when the TPLF was the major political player in Ethiopia. And now he is being accused of betraying the same country which he once served. If true, then it perfectly captures his personality, a person focused on personal gains even if it costs the world dearly. This makes all the more sense in the backdrop of his compromised tenure as the head of the World Health Organisation.

Read more: WHO is doomed as the whole world is realising its China-bias and its role in causing the pandemic.

The army chief of staff General Birhanu Jula said in a televised statement that Dr. Tedros is doing everything in his hand to support the separatists and terrorists, even arranging weapons for them. The army chief said, “We don’t expect him to stand on the side of Ethiopians and condemn these people. He has been doing everything to support them, he has campaigned for neighbouring countries to condemn the war.” However, he shied away from giving any substantial and specific details of his allegations against Tedros.

The latest accusations are not surprising because of the baggage Dr. Tedros carries, from being a Chinese Communist Party’s lackey to spreading misinformation from the highest position. The countries and continents which followed WHO guidelines are now severely distressed by the spread of the COVID-19 pandemic. And now, as the accusations from the Ethiopian government mount, he may very add another accomplishment to his resume of destablising a country. Although these allegations are still to be substantiated, with his own country calling him a traitor, one must keep an eye on his actions going ahead.

As Erdogan grapples with the French and Russian double attacks, Iran may join the conflict as well