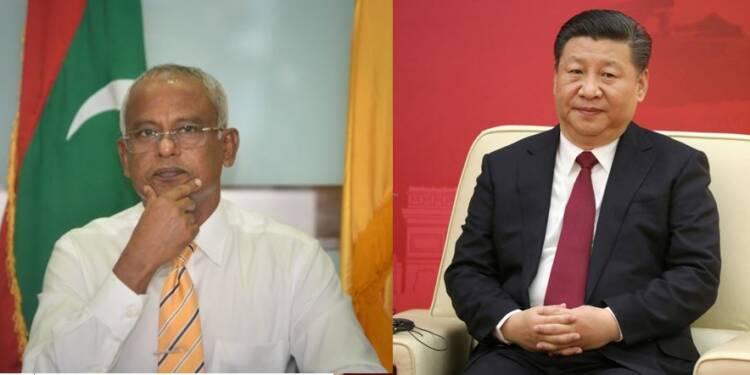 In what comes as a whipping slap to China and its debt trap policy, the small island country of Maldives bolstered by the support of India and the US has made it clear that it cannot pay China back even if it sells “our grandmother’s jewellery.” The shark loans were lent by the communist regime during the tumultuous reign of Abdulla Yameen.

Former President of Maldives and Parliamentary Speaker Mohamed Nasheed who after joining hands with current President Ibrahim Mohamed Solih has been going after China, in a rather unorthodox manner–once again launched a scathing attack on Beijing.

“Discussing (the) 2021 budget in Majlis today. Debt repayments next year will amount to 53% of government revenue. Over 80% of debt repayments will go to China. Totally unaffordable. Even if we sell our grandmother’s jewellery, we won’t be able to afford these repayments,” tweeted a fuming Nasheed.

Discussing 2021 budget in Majlis today. 🇲🇻 debt repayments next year will amount to 53% of government revenue. Over 80% of debt repayments will go to China. Totally unaffordable. Even if we sell our grandmother’s jewelry, we won’t be able to afford these repayments. pic.twitter.com/Vc2v8n2Kov

Abdullah Yameen who came to power in Maldives in 2013 after President Nasheed was forced to step down had shown clear pro-China tendencies from the beginning. As a result, he allowed China and its companies to drop anchors in the island country to build important infrastructure projects, all whilst unloading heavily inflated loans on the meager economy of the country.

The fact that China was ensnaring the country into its debt-trap can be gauged from the fact that Xi Jinping had invested a mind-blowing 830 million dollars into the development of one of the airports. The massively inflated costs of the airport were later added to the bill of the Maldives which Mohamed Nashed had received in 2018.

However, after India bailed out the Maldives in August by giving out a 500 million dollar financial package consisting of a grant of 100 million dollars and a new Line of Credit (LOC) of $ 400 million—the archipelago and its fortunes started turning for the good.

Nasheed, who is also President Solih’s advisor was visibly elated by the developments and had tweeted a heartfelt message to show his gratitude towards India. He had also taken a sly dig at China which had been bleeding the country dry with shark-loans.

India further gave its blessings to the USA to sign a framework for defense cooperation with the Maldives with the intent to deepen engagement in support of maintaining peace and security in the Indian Ocean and cull the threat of Chinese encroachment. The framework for defence and security relationship was signed in Philadelphia on September 10 between US Deputy Assistant Secretary of Defense for South and Southeast Asia Reed Werner and Maldives Minister of Defense Mariya Didi.

Read: It was India that allowed the US-Maldives alliance which is going to end Chinese dominance in the region forever

Sensing the growing proximity of Maldives to India and the US, China’s Exim bank had asked the island country to repay 10 million dollar loans given to former president Yameen’s ally- Sun Ahmed Shyam.

By pouring massive investments in the region, India has killed two birds with one stone in the Indian Ocean Region. Firstly, killing China’s debt diplomacy in the Maldives and secondly, cementing its bilateral ties with the Maldives for a long period. Now, the statement by Nasheed– refusing to pay the Chinese loans is a testament to the fact that it is New Delhi and Washington that are pulling the strings from behind and consequently the Solih regime is feeding off the confidence provided to him by the two superpowers.