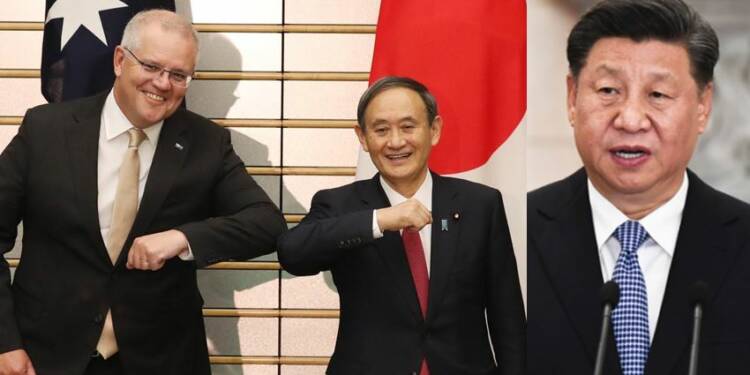 It is often the case, that when some are wrong, they tend to be suspicious of everyone around them, and this vulnerability makes them an irritant to all those around them. Chinese state media has been flagging its concerns about the intentions of Australia and Japan as they join the RCEP and still pursue the isolation of China. The recent cause for Beijing’s suspicion is the visit of Australian Prime Minister Scott Morrison to Japan and the in-principle agreement on the Reciprocal Access Agreement (RAA).

The Chinese Communist Party mouthpiece – the Global Times articulated China’s concerns on Australia and Japanese duality regarding their military and geopolitical containment of China and increasing economic engagement by becoming co-signatories of RCEP in the same breath. It says, “On the one hand, they want to do business with China, and on the other, they show no sign of stopping their China containment strategy geopolitically.

Recently, TFI prognosed that even though Australia and Japan have entered the RCEP, they will not play by the rules which China would like to set and will sabotage the organisation from within itself. China is now waking up to this threat to their designs. Within China, the agreement was portrayed as the harbinger of development and the end to the economic deterioration due to the Wuhan-originated COVID-19 virus. And it was rightly so, only if, China could subdue Australia and Japan to toe its line.

Read more: China’s feud with Japan and Australia will ensure that RCEP never takes off

The RCEP is a large organisation and has the potential to shape the direction world takes, in the Asian century. The RCEP members include the ten ASEAN member countries, Japan, South Korea, Australia, New Zealand, and China and covers around 30 per cent of the global GDP with more than two billion people residing within the borders of the signatory countries. China is the largest, most populous and economically most powerful member of this organisation with India not interested in signing the agreement. It was for this reason why China was ecstatic about the possibility of turning the organisation into an extension of Chinese imperial designs.

The Chinese however, recently have become concerned about the designs of the Australians and the Japanese. While the two countries have been steadily increasing their economic engagement with Beijing and all the others in the region, they are also steadily, through multiple minilaterals and the quadrilateral arrangement with India and the USA have been containing China strategically.

In an article, the Global Times worded this Chinese frustration and opinionated, “Many countries have separated politics from economic issues. Economic collaboration does not affect geopolitical containment. Japan and Australia are typical in such a mindset.”

The Chinese tried hard to perceive the RCEP agreement as to its geopolitical victory and thought that it was the right step in fulfilling Xi Jinping’s China Dream. However, now they are waking up to the reality of the sabotage from within, as Australia and Japan are increasingly working in tandem to create a counter to the Chinese designs to become the hegemon in Asia.

Letting China take the lead of things in RCEP will not be a good idea and solely depending on the USA to counter the threat is also not sustainable. Thus, countries like Australia and Japan are taking the lead to cooperate together and with like-minded countries like India to create a solid wall that can stop the Chinese bullying and aggressive posturing.