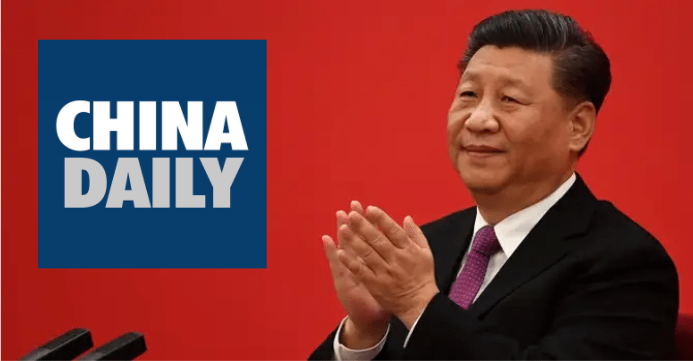 Ties between the Chinese Communist Party (CCP) and major American media houses, being brought to fore, have ceased to surprise anyone of late. It is an open secret that the CCP funnels money into the pockets of American media outlets via its own state media houses in order to get paid content, pro-China in bias, published as editorial commentary.

It has now come to light that the Chinese state media major, China Daily, which is owned by the CCP’s propaganda department, continued to pay U.S. media companies nearly $2 million for printing and advertising expenses over the past six months, despite being exposed as doing so in June itself. This comes even as it was earlier reported that certain publications were dedicating pro-CCP content at the behest of large funds they received from China.

The China Daily paid The Wall Street Journal more than $85,000 and the Los Angeles Times $340,000 for advertising campaigns between May and October 2020, according to a disclosure filed this week with the Justice Department under the Foreign Agents Registration Act (FARA). The report also revealed that the Foreign Policy magazine was paid $100,000; The Financial Times, a U.K.-based newspaper, $223,710, and $132,046 were doled out to the Canadian outlet Globe & Mail for advertising campaigns.

Over the past six months, China has spent close to $4.4 million on printing, distribution, advertising and administration expenses in the US. This report came at a time when countries around the world, particularly the United States were being ravaged by the COVID-19 pandemic which originated out of Wuhan in China. Many of the publications which received such large sums of money from China Daily took to whitewashing China of any criminality in relation to the pandemic. According to the Daily Caller, several articles critical of US officials who have accused the Chinese government of misleading the West about the pandemic and allowing the virus to spread globally have been published by those who received funding from China Daily.

TFI had reported in June how in the period between November 2016 and April 2020, the  CCP pushed in $19 million into the pockets of some major media houses of the US like the New York Times and the Washington Post. The major outlets which had been named in the documents submitted to the US Justice Department in June were The New York Times, The Washington Post, Wall Street Journal, The Los Angeles Times and The Seattle Times. NYT had received $50,000, while The Washington Post was paid close to $4.6 million by the Chinese Communist Party’s State Council Information Office. The lion’s share of the payments went to The Wall Street Journal, amounting to nearly $6 million.

While China Daily continues to make extravagant payments to major media houses in the US, the newspapers in the states are required to publish paid supplements called “China Watch”, which China Daily produces. These ‘inserts’ are designed to look like real news articles, even as they often contain a pro-Beijing spin on contemporary news events.

For example, The Journal is said to have received $461,489 in advertising revenue from China Daily in 2020. As such, some of the headlines published by The Journal looked as such: “Apple CEO: China Getting Outbreak Under Control”, “Trump’s China Remark Rebuked” and “US Spin On Virus’ Name Condemned”. Payments to the said publication are said to have stopped in June, after which no content has been published on its sponsored page.

Essentially, these payments would be serving as a tool to curb anti-China sentiments in the US media, and as a consequence, among the readers and public of the United States. In the run-up to the Presidential polls, and Joe Biden being declared the President-Elect by democrat media, what role such paid content by China played must be thoroughly investigated. The US must make it a point to ensure that no foreign money, particularly from abhorrent regimes like the CCP is allowed to flow into the pockets of American media outlets.