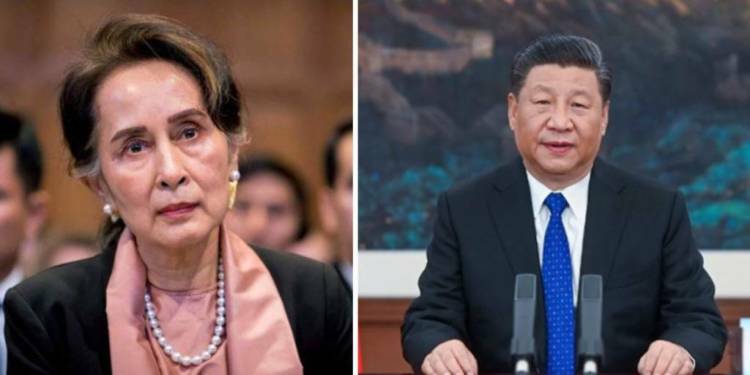 China had faced a lot of domestic and international shame when last year a consortium of Indraprastha Gas Limited and GAIL was chosen to supply and distribute natural gas to the ambitious New Yangon City Project. Now the Indian state undertaking, NTPC has been selected among the nine companies to work on the Project.

In a major jolt to the China Communications Construction Company (CCCC), the city project which is a part of the overly ambitious but evil in nature Belt Road Initiative (BRI) has been made open to companies of other countries as well. The Chinese government is known to insist on the use of Chinese companies only in the BRI projects but the threat associated with over-dependence on China-made Myanmar comes to the wise and well-timed realization. As a result, Myanmar decided to invite other countries into the bidding process of the project as well.

Under the Yangon City Project, the companies will be required to build an industrial zone of 3 sq. Kms and a bridge across the Yangon river. Earlier the budget of the project was kept at 1.5 billion dollars which has now been reduced to 800 million dollars. In a stern reply to China’s overenthusiastic incursions in its internal affairs, Myanmar became wary of the Chinese intentions.

Myanmar realized that if the Chinese activities and involvement are not put on a leash, it might become another fatality of the Chinese debt trap just like Pakistan which is practically a Chinese colony now, or Sri Lanka which was forced to surrender its Hambantota Port to China and even Nepal whose territory has been illegally grabbed by China.

Myanmar is quickly realizing the harms of the much-advertised Belt and Road Initiative. Myanmar has now come to the fact what India warned every participating country about real Chinese intentions. As the popular Hindi proverb highlights, China is nothing but ‘muh mein Ram, bagal mein chhuri’ which simply means talking good things in the front and stabbing in the back.

This has been China’s plan in the entire run of XI Jinping’s ambitious and malicious BRI project. Luring other countries with its heavy wallet, giving false dreams of infrastructure development and betterment of the lives of people, but in reality, the primary goal is the entrapment of other countries and overburdening them with enormous debts and if these countries are unable to repay the loans which are often accompanied with heavy interests, China gets to keep their lands, waters and natural resources.

When Myanmar released its Coronavirus recovery plan, none of the Chinese infrastructure projects under BRI was allowed entry. It is indicative of the rising anti-China sentiment in the south-east Asian country which used to be a part of unfragmented India. It is only because of the suspicion over China that the projects funded or constructed by India are not facing any restrictions. Myanmar seems to be keen on expediting the existing Indian projects and involving more Indian companies in its development process.

China is frustrated over these developments in its backyard and to disrupt the usually stable and peaceful region of the India-Myanmar border, it deploys terrorism. This tactic of supporting terrorists in neighbouring countries is coincidently similar to the activities of China’s junior partner Pakistan, which does it in India and Afghanistan.

China financially supports and trains the extremist terrorist organization Arakan Army. According to an estimate, 95% of its funding comes under the table from China and in return, the terrorist organization targets specifically the Indian assisted infrastructure projects in Myanmar. The terror organization is reportedly involved in planning against the mutually beneficial 484 million US dollar Kaladan Multi-Modal Transit Transport Project which will connect the Indian seaport of Kolkata with Sittwe seaport in the Rakhine state of Myanmar. The project will link the otherwise landlocked region of India’s north-east connected to the rest of India by a narrow Siliguri corridor.

India’s Myanmar policy is dictated by realism but with a humane touch. Centuries-old people to people relations cannot and will not be disrupted by an aggressive third party. India and Myanmar relations are on an upswing again, both governments now seem to be on the same page regarding the threat posed by China to sovereignty and freedom. The brave steps taken by Myanmar to reduce the out of place Chinese incursion into its affairs indicates a positive future. After the Yangon City Project, China should be ready to bow out of other projects in Myanmar and other countries very soon.