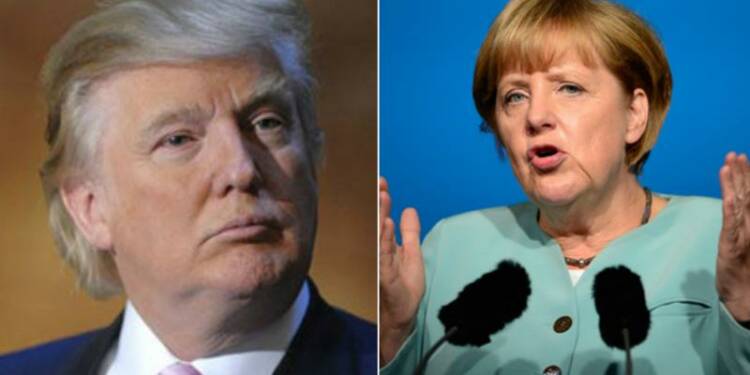 When the biased American mainstream media called the US Presidential polls in Biden’s favour, there was one European leader who was almost as happy as the Democrats themselves. We are talking about Germany’s Chancellor Angela Merkel, who has been treated by the US President Donald Trump with utter disdain over her hypocritical foreign policy and resistance to American leadership.

Among many of her ventures, Merkel wants to pursue the Nord Stream 2 pipeline for supplying natural gas from Russia to Germany, in a post-Trump era. Despite US sanctions, construction on the pipeline project in the Baltic Sea will resume this week. Merkel has probably pushed the project, after being emboldened by the disputed US Presidential poll results. However, as per WSJ, Washington is preparing new sanctions against the project that could potentially derail Nord Stream 2.

Nord Stream 2, being as ambitious a project as it is, seems riddled with ideological hypocrisy and sheer volatility. Consider this- German Chancellor Angela Merkel wants Russia to be sanctioned because Berlin says that Putin got Crimea annexed in 2014. Germany also uses Ukrainian sentiments in order to vilify Russia.

However, the Nord Stream 2 project will make Germany and a large part of Europe far too dependent on Russian gas. Not just this, but Nord Stream 2 would also throw Ukraine under the bus. The new pipeline project would reduce Ukraine’s strategic importance as it will be bypassing the country, isolating it in the geopolitical equation. This is something that Putin strongly desires, and Merkel is actually letting Moscow have its way.

Ukraine too has cautioned Germany against this project. Ater Denmark allowed the use of its territory for the completion of Nord Stream 2, Ukraine’s President Volodymyr Zelensky had said, “This is not only a matter of energy security, it is a geopolitical issue.” But German Chancellor clearly doesn’t care about Ukraine and insists on following a mercantilist approach when it comes to the controversial pipeline project.

However, what Merkel did not factor in was that Trump is still at the helm of affairs in the White House, and he can permanently impair the Nord Stream 2 project. According to WSJ, two Ukrainian officials working in Washington D.C.- Oleksandr Kharchenko, an official at Ukraine’s National Security and Defense Council, and Vadym Glamazdin, a representative of Ukraine’s Naftogaz national oil-and-gas company, have been looking for vulnerabilities in the pipeline project.

These Ukrainian officials have been lobbying for concrete American action against Nord Stream 2. They are willing to have either the US Congress or the White House torpedo the Russian-German project.

In this context, WSJ has claimed that Washington is preparing new sanctions which will make it practically impossible to refit the Russian pipe-laying vessel Akademik Cherskiy for handling pipes of greater diameter. The latest sanctions are reportedly going to be a part of a defence-spending Bill, and come into force by the end of this year. Companies making modifications and businesses involved in insurance, testing, inspection and certification, would be on the radar of new American sanctions.

As per WSJ, Vadym Glamazdin claimed that the sanctions will be “the final nail into the coffin of this project.” He feels that there will be no possible completion of the Nord Stream 2 pipeline project, once these sanctions are imposed.

Merkel has been caught on the wrong foot here. She thought that Trump’s reign in Washington is over, and now she can push through the highly controversial Nord Stream 2 project. But Trump is now in a position to destroy the pipeline project with some to