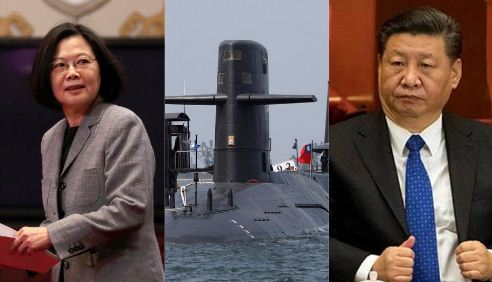 The Chinese started out in the pandemic as the front runners and misconceived that they will be able to utilize this opportunity to further and fast forward their imperialistic designs. These dreams are shattering one after another with the whole world rallying against the belligerent and aggressive Beijing. Taiwan has been at the forefront of the Chinese bullying and as a result, has shed all pretences of being docile and has started making itself militarily strong. In line with the military strengthening programme under President, Tsai Ing-wen, Taiwan has begun building its new submarines the first time in a generation. And when the boats enter service starting around 2025, they could help to tilt the balance of power across the Taiwan Strait—toward Taipei.

The strategy has always remained to make any possible offensive launched by Beijing so costly that the cost to benefit analysis makes these excursions impractical. The idea is simple, make the defence so tight, that if China attacks first, the Chinese should be incurred an immense loss, and second, even if they are able to land troops on the shores of Taiwan, they could not sustain an offensive, as the cost would be so behemoth.

On Nov. 24, dignitaries gathered at shipbuilder CSBC’s new submarine factory in Kaohsiung, where they marked the start of production and it was a celebration of sorts. “Proud to launch our #MadeInTaiwan submarine program,” Taiwanese President Tsai Ing-wen tweeted.

As soon as the new submarine factory is up and running, Taipei aims to acquire as many as eight submarines. They are supposed to replace the two Zwaardvis-class boats that Taiwan acquired from the Netherlands in 1987 and 1988 and the two U.S.-made Tench- and Balao-class boats that Taipei bought in 1973.

The latter two boats date from the mid-1940s. They are the oldest submarines in the world. And unfortunately, it is not something to be proud of, thus, Taiwan has taken a leap to produce Subs in its own territory.

As per Reuters, the eight submarines could end up costing a combined $16 billion. But they should be worth every penny. “Their counter-coercive value should not be underestimated,” said Mark Stokes, the Executive Director of the Project 2049 Institute in Virginia. The Subs will be using lithium-ion batteries for underwater propulsion. Their armament includes Mark 48 torpedoes and Harpoon anti-ship missiles.

Interesting internal view of the ROC Navy's Indigenous Defense Submarine printed on the invitation card to CSBC Corp. commencement of construction work for the class on November 24. Probably shown for the first time in such subtle manner. https://t.co/6z5oDDBKMm pic.twitter.com/Qgi4o6YYQq

The Taiwanese navy obviously plans to deploy the new submarines in the anti-shipping role, targeting the Chinese ships that would carry an invasion force across the 100-mile-wide Taiwan Strait. The fact that the Taiwan Strait, is a pretty open region and any maneuvering in its waters will not be successful, thus the waters have always favoured those on the defensive. “The shallow, noisy waters of the Taiwan Strait greatly favour submarines over air and surface [anti-submarine warfare] forces,” said Owen Cote, one of the submarine experts at the Massachusetts Institute of Technology.

It doesn’t necessarily matter that the Chinese Navy possesses around 70 attack submarines of its own plus scores of sonar-equipped surface warships and maritime patrol planes. These forces are not a strong defence against even a small flotilla of Taiwanese subs. Thus, if and when the Chinese launch a full-fledged offensive, only then the defensive capabilities of China will be of no use and even a small fleet of Taiwanese submarines, coupled with Missiles, Air Defense Systems, and Drones will be a very aptly tackle and even will have the potential to destroy any Chinese design.

Read more: A tiny Taiwan’s growing military might have made China very nervous.

“Outside of the U.S. and the U.K., submarines are not considered primary ASW platforms, and outside of NATO and Japan most navies are pretty bad at the surface- and air-based ASW, so in the rest of the world it doesn’t make sense to compare numbers of submarines on each side the way you would, for example, numbers of air-to-air fighters,” Cote explained.

Taiwan’s submarine programme, coupled with the intensive defence modernisation and active military purchases means business. The Taiwan of today is making its defences impregnable and at the same time increasing its attack lethality, thus achieving the twin goals of defence and maximising the cost of any possible incursion from across the strait.