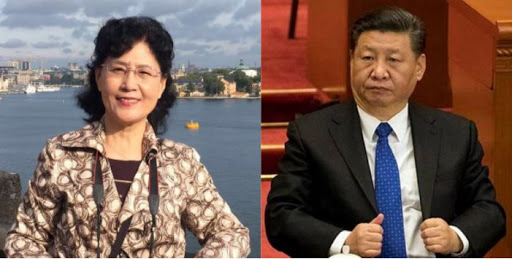 Cai Xia – the brave Chinese woman who took the CCP and its General Secretary head-on from within the party ranks, has been in the news for quite some time. Cai has called the CCP a ‘political zombie’, and also stated that Xi Jinping has no moral right to continue as the Chinese President, making a case for the brutal dictator, who she calls a “neo-Stalinist” and “mafia boss” to step down. Undoubtedly, Cai Xia is among the foremost anti-CCP crusaders around the world. Now, in a lengthy commentary for Foreign Affairs, Xia has written her heart out about the draconian political outfit called the Chinese Communist Party and also shed light on how its propaganda works.

Cai Xia has been a religiously devoted Marxist for a great part of her life, due to which she was greatly inspired initially by the ideals which the CCP appeared to stand for. With time, obviously, every youthful Communist realises the abject uselessness of holding 19th-century political theories and doctrines in high regard. The same happened with Cai who went on from being a pro-Constitutional democracy thinker to an all-out anti-CCP crusader.

Cai, who has been living in the United States since last year, has been described as an advocate of political liberalisation in China. A retired professor of the Central Party School of the Chinese Communist Party in Beijing, Xia has shed first-hand light on the inner machinations of the draconian party she held in high regard previously. “I remained loyal to the CCP, yet I was constantly questioning my own beliefs,” Cai revealed in the Foreign Affairs article.

Read more: ‘Xi is a Mafia Boss, majority of CCP members want him out,’ Expelled CCP member spills the beans

Reading Cai Xia, one is convinced that the CCP is comprised of actual zombies who have no conscience of themselves, and who, serve at the mercy of Xi Jinping. In fact, Cai, while recounting how she was verbally reprimanded for not being brain-dead and instead, exercising the vibrancy of her free thought, said, “The CCTV people weren’t interested in the real implications of ideology. They just wanted to make the party look good and flatter their superiors.” This was when Xia was asked to write a televised documentary script on former Chinese President Jiang Zemin’s ‘Three Represents’ principle, which paved the way for entrepreneurs and ‘capitalists’ to be a part of the CCP, and also supported the cause of economic liberalisation to an extent.

“The Central Propaganda Department, the body in charge of the CCP’s ideological work, was responsible for promoting Jiang’s new theory, but they had a problem: The Three Represents had come under attack from the extreme left, which thought Jiang was going too far in wooing entrepreneurs. Hoping to skirt this dispute, the Propaganda Department chose to water down the theory.”

On one occasion, while censoring Cai Xia’s script, a borderline-illiterate CCP official, who headed the State Administration of Radio, Film, and Television probed Xia over the usage of words “Poverty is not socialism; development is the hard truth” in her script. Intriguingly, these were not Cai’s own words, but those of former Premier Deng Xiaoping, who played a pivotal role in reforming China. Now, Xia was reminded of the words of Mao Zedong for bureaucrats: “They don’t read books, and they don’t read newspapers.”

It was not particularly difficult to gauge the fact that Cai Xia’s disillusionment with the CCP started with the Tiananmen Square massacre. She said, “In June 1989, the government cracked down on pro-democracy protesters in Tiananmen Square, killing hundreds. Privately, I was appalled that the People’s Liberation Army had fired on college students, which ran contrary to the indoctrination I had received since my childhood that the army protected the people.

According to Cai, the CCP has always treated demands for social and economic justice as threats to its power, suppressing civil society and restricting people’s liberties. Questions are not entertained within the CCP any longer, which is in contrast to the environment in which Cai herself grew. Earlier, party cadres were allowed to discuss the fault lines within the CCP. Now, the same would invite incarceration.

Cai Xia has played an instrumental role in propagating to a generation of CCP leaders the virtues of Chinese communism, albeit half-heartedly herself. Reading her, one is convinced that a Communist China is no better than Nazi Germany. Of course, she can no longer return to China after mounting such an offensive against the CCP, fearing for her life. But now, she is relentlessly exposing the CCP for what it really is.