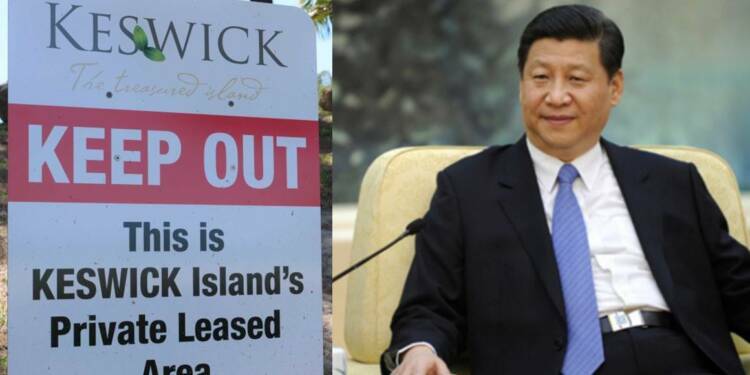 After months of aggression by the Chinese Communist Party to ruin the Australian economy, which failed harrowingly, the Australian government, rejuvenated by its bullish economic growth finds itself in a position of power as it looks dead set to drive away Chinese colonization of the Keswick Island.

The animosity between China and Australia has increased over the last few months, especially since Australia called for an open international investigation into the origins of the Wuhan Virus in China. What followed next has certainly put the relations in a deep freeze. Trade embargos and tariffs were aimed at crippling the Australian economy which did not work as Australia posted a 3.3% growth and pulled its economy out of recession after three decades.

The Keswick Island is now under the spotlight as the Australian clamour to boycott Chinese products and drive out Chinese investments grows louder, Scott Morrison looks dead set to deliver a blow in retribution.

Keswick Island, situated 30 km from Mackay is a tiny island in the Coral Sea is at the bottom of the Whitsundays. It is a pristine piece of Australia’s paradise and is now under control by a Chinese company, China Bloom.

The wealthy Chinese developer is driving away from the locals from the majestic island as it closed beaches, parts of the national park, and the airstrip and had banned short term accommodation and rentals.

The small community that resides there and calls it home has been banished from accessing large parts of the island including the 400-hectare national park. Locals on the island are gobsmacked and furious; they cannot believe that they are being driven away from their homes.

The member for Whitsundays, Amanda Camm was furious at the turn of events in a year on Keswick Island. She said: “This is not Communist China, this is Australia. This is Queensland and this is the Whitsundays.”

Almost all major companies in China are beholden to the Chinese Communist party and it remains unclear as to how such a pristine and environmentally important piece of island was handed by the state government. Since the lease illegal structures have been constructed this has destroyed the natural habitat, including the turtle nest on the island.

Moreover, major changes have been witnessed on the island ever since China Bloom took over. The shoreline has been excavated, access to parts of the National Park prohibited, and ‘keep out’ signs erected around the island. The Chinese developer’s conduct is raising genuine doubts about its intentions. The locals have raised concerns with the state government and have been given assurances but they feel that they are not being listened to.

The deal signed with Chinese Bloom is a 99-year lease signed by the local Queensland state government which is controlled by the Labour Party in 2019. A year since the Chinese expansionism is in full show on the small beautiful island.

Moreover, it is not just the Keswick Island that has come under intense scrutiny. The CCP via its subordinate pseudo-Private firms has taken control of various Australian ports such as the one in Darwin. The deals made by the state governments in Australia do not come under the purview of the Central government until the Australian government decided enough is enough.

The Australian government to stem the undeterred growth of Chinese investment recently passed legislation that can override any deals made by the state parties with foreign companies. The state of Victoria which is a crucial element of the Chinese Belt and Road Initiative had seen a lot of investments from China but all of it now seems threatened.

The recent animosity has transcended trade and diplomacy as a tweet by Zhao Lijian, China’s Foreign Ministry which displayed a fake picture of an Australian soldier holding a knife to the throat of an Afghani Child sparked a furious reaction from the Australian Prime Minister Scott Morrison. Morrison even made a statement on Chinese-run WeChat which was quickly taken down furthering the tensions.

The Keswick Island saga can turn ugly for the future of Chinese investment in Australia. As the Australian government comes to grips with the intensity of Chinese intrusion on its soil, including the media, the Keswick Island can be the start of another gruesome episode in the diplomatic spat between the two states. Prime Minister Scott Morrison is unrelenting in his bid to stand tall in the face of Chinese animosity and it looks like it is the end of the Chinese dream in Australia.