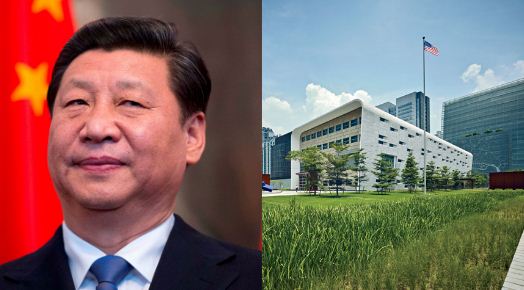 The Chinese Communist Party and its lackeys are long known for committing the most heinous of human rights violations, killing their own citizens with armed tanks, executing an ideological, cultural and religious genocide in occupied-Xinjiang and Tibet. In the most recent of addition to the long list of ghoulish crimes committed by the CCP, it has been revealed that they might have targeted American diplomats with radio frequency energy of radiation; most likely microwaves.

Over the past four years, American diplomats are purportedly being targeted within their consulates in China and Cuba with microwaves, resulting in grievous health complications, most often complemented with damage to the neural system.

In a report published by The National Academies of Sciences, Engineering, and Medicine, although blame is not directly attributed at China for lack of concrete investigative evidence, it is made amply clear that the happenings are not natural. Saying that such technology can be used for “nefarious purposes”, the report added, “The mere consideration of such a scenario raises grave concerns about a world with disinhibited malevolent actors and new tools for causing harm to others, as if the US government does not have its hands full already with naturally occurring threats.”

In the Chinese city of Guangzhou, American diplomats have been falling sick for unexplained reasons. Now, with the report of the National Academics of Science being made public, it becomes clear that China is targeting Americans inside consulates for demented reasons best known to the CCP. Interestingly, the attacks against American diplomats have only started after Donald Trump became President in 2016.

While most attacks seem to have taken place in 2016 and 2017, there have also been incidents in subsequent years. In fact, such was the sophistication of Chinese attacks against American diplomats that when investigators tore apart the concerned buildings, they found no acoustic devices to account for the sound which could be heard in the premises. It was here that they realised that the sound was merely a means of hiding the targeted microwaves being beamed from nearby locations into the consulate by America’s enemies.

The attack on American diplomats with microwaves go in fragrant contestation of all human rights postulates and general diplomatic decency. To wage a war against a country’s diplomats secretively, and to impair their health permanently requires a level of shamelessness and cowardice which is found globally only among the CCP ranks. The US, in light of such revelations, will be well advised to snap diplomatic ties with the insane nation that China has become.

China is attacking American diplomats despite the fact that its own soldiers suffer from an unapparelled fear of combat, which is why upon being deployed to the Indo-Tibet border, PLA little emperors were seen crying hysterically. To mask such inherent cowardice, China is waging a masked and secretive war against the U.S. and democratic world order.

The Big East Asia Buildup: US, UK, France and Russia are now standing at China’s doors