All is not well within Saudi Arabia 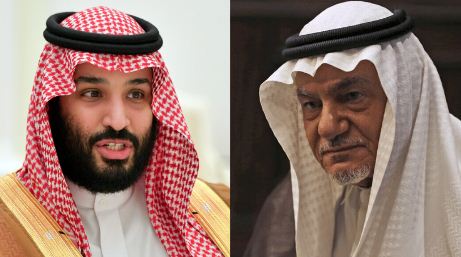 And the generational division in Saudi Royal Court was on display yet again during the International Institute for Strategic Studies’ Manama Dialogue in Bahrain’s capital. The Dialogue was attended by Saudi Prince Turki bin Faisal and Israeli Foreign Minister Gabi Ashkenazi joined it by a video link from Jerusalem.

The Dialogue titled “New security partnerships in the Middle East” was expected to be a display of growing closeness between Israel and Saudi Arabia, but the Saudi Prince made certain remarks that exposed lack of coherence within Saudi Arabia on the Israel issue.

Turki bin Faisal said, “All Israeli governments are the last of the colonizing powers in the Middle East.” He did not stop here and insinuated Israel of establishing an “apartheid wall” in the West Bank, of “demolishing homes as they wish, and assassinating whoever they want,” of having 20 nuclear weapons, and also and of “denying non-Jewish residents equality under the law.” The Saudi Prince added, “What kind of democracy is that?”

However, bin Faisal’s remarks expose a clear dichotomy amongst Saudi royals. To be precise, this division keeps showing now and then. Earlier this year, Mohammed bin Salman gave tacit approval to the Abraham Accords that ended historical hostilities between the Arab World and Israel. However, the Old Guard in the Saudi Kingdom, including bin Salman’s father, wasn’t too eager at the prospect of establishing diplomatic ties with Israel.

Almost all the people of the second generation of Saudi Arabia are against befriending the Jewish nation formally. But Mohammed bin Salman has a different approach. He is a young and ambitious ruler who stormed to power in June 2017 at the age of 31 by staging a coup against an older Muhammad bin Nayef and then carried out a purge of rivals.

When it comes to Israel, the Crown Prince prefers a pragmatic and business-minded approach, as opposed to the dogmatic worldview of second-generation Saudi Princes whose minds are overwhelmed by the entire history of Saudi-Israel hostility.

In 2018, for instance, Mohammed bin Salman said, “Israel is a big economy compared to their size and it’s a growing economy, and of course there are a lot of interests we share with Israel — and if there is peace, there would be a lot of interest between Israel and the Gulf Cooperation Council countries and countries like Egypt and Jordan.”

So, even much before the Abraham Accords were signed, Mohammed bin Salman was ready to pave way for Saudi-Israel friendship. However, older Saudi leadership clearly stands in way of normalisation of relations between Israel and Saudi Arabia.

Whether Saudi Arabia establishes formal ties with Israel or not depends on who will prevail within the Saudi Royal Court. Going by bin Salman’s unquestioned leadership, his disruptive rise to power and ability to crack down on his rivals, it seems that Mohammed bin Salman will have his way when it comes to befriending Israel.