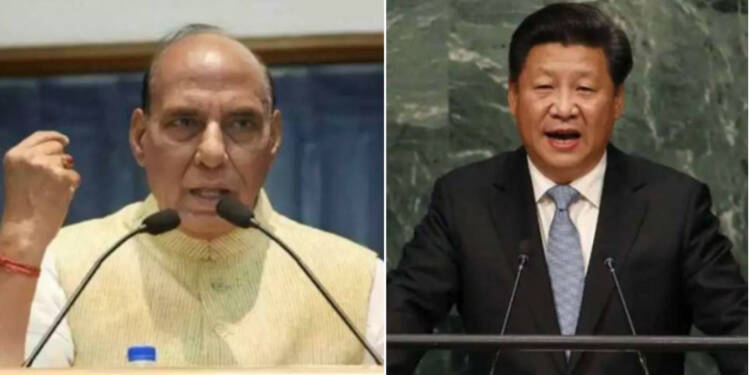 In a subtle jibe, India’s Defence Minister Rajnath Singh indirectly highlighted the alleged role played by Chinese authorities in failing to restrict the spread of Coronavirus. Rajnath Singh was virtually addressing the ‘ASEAN Defence Ministers Meeting-Plus’ commonly referred to as ADMM-Plus. The grouping comprises 10 ASEAN nations and the eight other dialogue partners which include India, the US, Japan, Australia, the members of Quad, and China among others.

Chinese Defense Minister Wei Fenghe was also among the audience where Singh called on China without naming it when he stated about “the current regional environment with visible strains”. He acknowledged the role played by the ASEAN member countries in leading some of the most important forums of the world. He extended his appreciation by highlighting the role played by ADMM-plus in promoting a pluralistic and cooperative security order in Asia.

“We also need to continue our efforts to address the threats of bio-terrorism, transnational trafficking and pandemic diseases. The support of the military establishments of our respective countries to their civilian law enforcement counterparts is important,” added the Defence Minister in his address, while taking an indirect jibe at the paper dragon in its alleged in unleashing the COVID-19 outbreak upon the world.

While also giving a stern statement that highlighted India’s peaceful and cooperative stance, he echoed the current need of “enhancing mutual trust and confidence, exercising self-restraint in the conduct of activities and avoiding actions that might further complicate the situation.”

This was in direct reference to the military standoff going on between India and China which was born out of China’s expansionist activities in the Indian Union Territory of Ladakh which Beijing orchestrated from the Chinese occupied territory of Aksai Chin. He also highlighted the need for maintaining a rule-based, free, inclusive, and open region, free of cybercrimes, maritime bullying, and terrorism which continues to haunt the world peace.

He addressed the importance of ASEAN centrality in the Indo-Pacific and how the Indian values of ‘Vasudhaiva Kutumbakam’ – ‘the whole world is one family’ and ‘Sarve Bhavantu Sukhinah’- ‘all be at peace’ are very important in the ongoing situation. We as a citizen of this world need to be together just like a family and move forward with the policy of ensuring that everyone in the world should be at peace. No individual or country should try to enforce its choices on others and cause others no harm.

Read More: Xi Jinping decided to build an Aatmanirbhar China, but Chinese consumers destroyed the plan in a second

The Defence Minister while addressing the other ASEAN defence ministers said that the Coronavirus is continuing to disrupt the working of the world. He hoped that the world economy experiences collective growth so that no country is left behind. This was an indirect reference to China which achieved a ‘miraculous’ recovery from the Coronavirus pandemic. In the official statement, he stated that “the support of the military establishments of our respective countries to their civilian law enforcement counterparts is important” which might be seen as a reference to the conflicts that occurred between Army and Provincial Sindh Police in Pakistan.

But the references to Pakistan were the most hard-hitting, with countries like Australia under Scott Morrison and the US under the Trump administration calling out China for mishandling the virus in its initial stage. The leaders also set up their investigation teams to determine the origin of the virus which brought China much embarrassment globally. Even its activities during the height of the pandemic were deemed questionable. Its faulty testing kits, PPE kits, and poor-quality protective masks were returned straightaway by many countries. Even its vaccine research has been shrouded with issues of discrepancies such as illegal testing.

Therefore, the Defence Minister Rajnath Singh’s address at the ADMM-Plus meeting which took an indirect jibe at China should be a realization for Beijing. Its activities of engaging in cyberterrorism and using diseases as weapons to achieve its dream of world domination are no more a secret. It should realize that the entire world is slowly coming to terms with the thoughts reiterated by India and other democracies regarding the ‘peaceful rise’ of China. China’s meteoric rise comes with many side-effects for other countries and their citizens and the Wuhan virus is one of them.