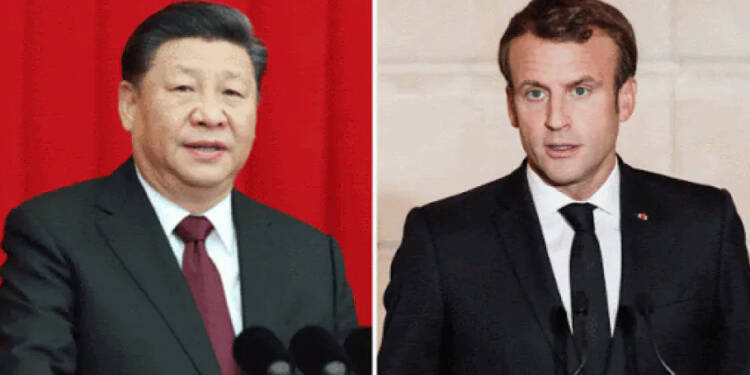 Xi Jinping and French President Emmanuel Macron had a call on Wednesday evening, where the Chinese leader went out of his way to appease the French counterpart. Xi committed to pushing for the development of stable China-EU relations, “No matter how the international situation changes,” adding, “We respect all countries to choose their development paths by themselves.”

He also hoped that the European side would adopt a more positive policy towards China. These statements coming from the Chinese alpha-nationalist Xi Jinping, just days after professing a similar tone with the Germans, means that China feels highly threatened by the latest French push into the Indo-Pacific and France’s overall anti-China policy shift.

France has recently upped the ante against the 2020 version of China and it has gotten the administration in Beijing and Xi Jinping really scared. The Chinese are already facing so much containment from outside, a crumbling economy inside and a future marred with uncertainty and increasing containment. Now, in the face of increasing threats from France and thus European Union, Xi Jinping went out of his way to call Emmanuel Macron. The Chinese are also trying to set a narrative to appease Emmanuel Macron, placate him and the European Union, thus trying to hamper any possible collaboration between the USA and the EU; however such attempts will be ineffective.

The latest statements by the European Union envoy to China must have hit the Chinese; his statements brought China’s worst fears to light. Ambassador Nicolas Chapuis, speaking in Beijing, said that the EU hopes to formulate an agreement with the next US administration on policy towards China. He said, “Let’s cooperate with China as much as we can when we can, when China is ready to cooperate. And let’s disagree when we must,” adding “we need to have a common understanding to say ‘no’ to bullying and intimidation, coercive diplomacy, ‘wolf-warrior’ diplomacy.” These statements in the Chinese home turf, made China understand that the EU will no longer be the docile cash-cow that it used to be, and would not be swayed by Chinese promises which never materialise.

While, Jinping was trying to talk to German leader and the long time friend of China, Angela Merkel, literally borderline requesting, to keep the overall relationship between EU and China and China’s ambassador to EU, Zhang Ming had said, “We made breakthroughs on the level playing field issues, this is a solid step forward. We are now working on the Market Access and Sustainable Development chapters.”

Read more: With EU slipping out of hands, a desperate China calls for a truce.

Now as Angela Merkel is supposed to demit office next year, the possibility of France leading the European Union becomes more and more evident and as earlier reported by TFI, the recent developments in Europe suggest that the member countries are showing confidence in Emmanuel Macron. France had adopted the Indo-Pacific as a term in its geopolitics back in May 2018.

The country has increased its activity in the region and is a party to multiple mini laterals in the region with deep strategic partners, be it, India, Japan, and Australia among others. Recently, France has also obliged the request of the Indonesians for purchase of Rafale Jets, and that could be finalised really soon. This is one of the many steps that have made China scared and the obviousness of Macron being the next leader of EU, Beijing had no other option but to reach out to the French, with all means necessary.

Read more: How Macron has totally changed the game in the Indo-Pacific with talks, trade and military ties with important countries.

France has also agreed to the planned naval exercise with the USA and Japan in May next year. The three powers – Japan, U.S. and France are slated to conduct joint military drills in the East China Sea. The drills, which are to be conducted on one of Japan’s uninhabited outlying islands, will focus on providing relief during a natural disaster.

Read more: Macron makes a direct move to provoke China, France is all set to enter the East China Sea with the US and Japan

These developments coupled with the statements by the EU envoy to China makes a solid case that the policy of France and the outlook of Emmanuel Macron will direct the policy of the European Union towards France. This has been realised by the Chinese and XI Jinping knows that he needs to get on the good side of Macron so that Europe is not lost as an export market.

And in these difficult economic times, China cannot afford to lose an investment option as large as Europe. These requirements and geopolitical realities have started to kick into Chinese consciousness and thus, it has shed all of its arrogance and instead of taking a high handed approach, it has left no stones unturned to appease Macron so that the EU does not collaborate with the USA to formulate a joint policy towards China.