‘Cannot rely on US under Biden,’ Macron is snatching EU leadership from Germany and rejecting Biden’s shadow 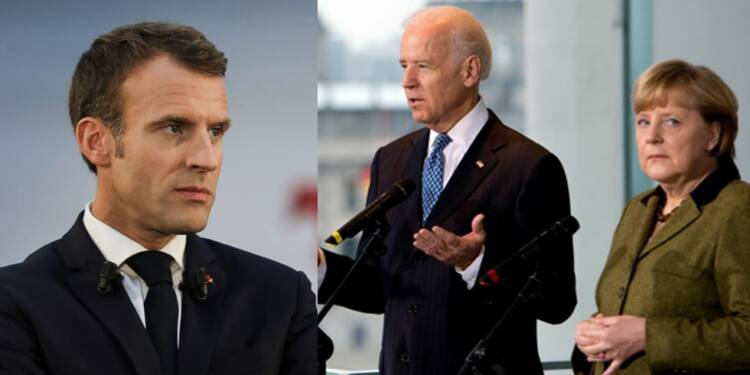 Emmanuel Macron is rising to be a leader Europe needs in the face of rising uncertainties in the world. While for years, Germany has remained the seat of power in Europe, but with changing political and power dynamics across the Atlantic and in on the European mainland, Macron has staked his claim to be the leader of the European Union.

French President Emmanuel Macron has said that the European Union must increase its efforts to develop the capacity to act independently in technology, international finance, and defence regardless of whoever occupies the seat in the Oval office. Macron has been pushing for a leadership role and the latest Islamist terror attacks in France presented him with the perfect opportunity to call upon European leaders to rise in the face of terror.

Macron, in an interview with Le Grand Continent, said that EU leaders mustn’t let Donald Trump’s defeat persuade them that they can return to relying on the U.S. to underwrite European security and to defend the bloc’s interests.

He stated: “The United States will only respect us as allies if we are earnest, and if we are sovereign with respect to our defence,” Macron said. “We need to continue to build our independence for ourselves.”

Besides, Macron disagreed with the German Defense Minister’s statements who earlier in the month said that it’s an illusion to think that the EU can replace the US’s role in upholding security on the continent.

Macron in his reply said: “That it is a historical misinterpretation. Fortunately if I understood things correctly, the chancellor does not share this point of view”

Macron is trying to rejuvenate the spirit of the European Union so that it can take a stand for itself. It can no longer rely on the US to take charge in Europe, and Macron is working hard to not let the US take charge again.

The latest Islamist terror attacks on France has given Macron a platform to unite the EU on its immigration policies. That’s where Macron wants to make a statement. Immigration has been one of the biggest political issues in the EU. Moreover, Macron’s stand has been criticized in the US by the pro-immigration lobbies. Therefore, he does not wish to pursue US-led policies. Under Biden, these policies will become even more liberal.

Besides, Macron wants the EU to become the leader of its policies. Therefore he is willing to reject Biden’s leadership and delegitimize it so that he can legitimize his role. European policies under US leadership have not proved fruitful, especially for the Europeans, and under a new democrat regime it could get even worse for them with more liberal immigration policies.

Macron is seeking change, and thus, has been fighting Islamist terrorism, and extremism to unite the EU while at the same time, is also pushing hard against the US’s leadership syndrome. Macron wants to lead the European Union and show them a better immigration policy and wants the EU to regain lost narratives in the International structure and pursue its multinational interests as a unified bloc.

EU needs to take control of its policies regarding Turkey, Russia, and across the Mediterranean. These geopolitical arenas will have a direct impact on the EU’s power projection and ambitions. Macron wants to build upon the idea that Europe can pursue its interests rather than get surrounded by hostile powers and governments by following under the leadership of a third party.

Read More: France is speaking the language of Brexit and it can either strengthen the EU or tear it apart

Moreover, America’s perverted idea of Islamic-liberalism and hostility to Europe in recent years has given Macron the push he needed to start delegitimizing the US leadership on European issues.

For the European Union, it must come up with a more independent foreign policy. Macron is willing to lead the European Union and has focused on the immigration policies before turning towards major geopolitical arenas. Macron is pushing for the EU to build upon its defences and take control over its policies. He is also one of the only leaders to tackle Russia and in matters of Europe is unwilling to engage with external powers at all.